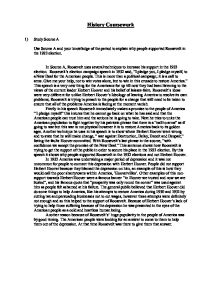 History Coursework 1) Study Source A Use Source A and your knowledge of the period to explain why people supported Roosevelt in the 1932 election. In Source A, Roosevelt uses several techniques to increase his support in the 1932 election. Roosevelt's election campaign speech in 1932 said, "I pledge you, I pledge myself, to a New Deal for the American people. This is more than a political campaign; it is a call to arms. Give me your help, not to win votes alone, but to win in this crusade to restore America." This speech is a very new thing for the Americans for up till now they had been listening to the views of the current leader Herbert Hoover and his belief of laissez-faire. Roosevelt's ideas were very different for unlike Herbert Hoover's Ideology of leaving America to resolve its own problems, Roosevelt is trying to preach to the people for a change that will need to be taken to ensure that all of the problems America is facing at the moment vanish. Firstly in his speech Roosevelt immediately makes a promise to the people of America " I pledge myself" this insures that he cannot go back on what he has said and that the American people can trust him and the actions he is going to take. Next he tries to unite the American population to fight together by his patriotic phrase that there is a "call to arms" as if going to war but this war is not physical however it is to restore America back to its golden ages. Another technique he uses in his speech is to show where Herbert Hoover went wrong and to state that he will make change, " war against Destruction, Delay, Deceit and Despair," listing the faults Hoover committed. With Roosevelt's last phrase in the source, "with confidence we accept the promise of the New Deal." ...read more.

Explain your answer. From analysing both source H and I believe that the source that would be most useful as evidence about public opinion is source I. I believe this because firstly of the authors of the sources. Source H was written by a supporter of Roosevelt and was part of his election campaign. As Roosevelt would have wanted a really good reputation in order to gain more support he would have put a piece that portrayed him in a very good light in order to win the election. So from this we can gather that source H is biased towards Roosevelt. Also this letter was written by one individual out of the millions of people in America and so definitely does not give us evidence of what the general public thought of Roosevelt. Now to source I, this source is a part of a popular song from 1936. The song puts Roosevelt in a very god light and is very supportive of him. The song describes how things changed when Roosevelt was elected and that now he has been re-elected things can only get better for America. "Since Roosevelt's been re-elected, we'll not be neglected." As it is clearly stated that this song was popular, it was probably known by many members of the public, this serves as much better evidence of the public opinion because it was the opinion of more than just one person. 6) Study Sources J and K Why do you think these two people disagree about the New Deal? Explain your answer. Studying source J, we notice immediately that the man who created this source (S.B. Fuller) was a self-made businessman. This means that he probably became a self-made businessman during the time Hoover was president. It is clear that he supports the policies of the republican and so perhaps is a republican. As he is a self-made businessman he would the economy to be left alone because if the government tampered with the economy, it would affect his business. ...read more.

But we know that the New Deal helped farmers a lot because it made agencies to modernise their equipment and techniques of farming while also helping farmers to stay in their property with the government's help. Also other criticisms which came from the Americans about Roosevelt was that he was becoming too powerful. His 'rush of power' came originally when his NIRA agency was declared in the Supreme Court as illegal. Knowing that they would take this measure against other New Deal measures he asked Congress to give him the power to appoint new Supreme Court judges so that he would be able to pass his measures through. The Americans were alarmed by this and saw Roosevelt tampering with the balance of the Constitution and so they believed that reforming the Supreme Court would give the President too much power. Because of the response to this, Roosevelt stepped down from his original statement, however after this the Supreme Court were more lenient in passing new acts. Looking at all the sources here we can see that there are more sources backing up statement 1 than for statement 2 however using quantity alone is probably not the proper way of evaluating the evidence to see which viewpoint they agree on. I believe though that there are more reliable (unbiased) sources in the selection to back up viewpoint 1. However from our own knowledge we can see that the New Deal did seem a success in solving many of the consequences of the Depression although there were signs that it may have failed - the increase in unemployment during 1938 when Roosevelt cut the New Deal budget. It is perhaps true to say that depending on what government you supported during this period of time, there are different ways you could have interpreted the New Deal either it was a failure or a success. However, assuredly the vast majority of these sources that we have in this selection seem to have an element of favouritism within it making it bias and unreliable. ...read more.