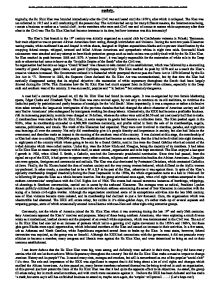 Use your own Knowledge to explain the role and importance of the Ku Klux Klan in the U.S. society. Originally, the Ku Klux Klan was founded immediately after the Civil war and lasted until the 1870's, after which it collapsed. The Klan was then reformed in 1915 and is still conducting till the present day. The Activists had set up for many different reasons, the foremost ones being, to create a business or rather as a 'social club', invite members who were anti-Civil war and of course to restore white supremacy after their defeat in the Civil war. The Ku Klux Klan had become immense in its time, but how immense was this immensity? The Klan's first branch in the 19th century was initially organised as a social club by Confederate veterans in Pulaski, Tennessee. Their main objective was to prevent African Americans from voting, through intimidation and violence. During the next two years Klansmen wearing masks, white cardboard hats and draped in white sheets, designed to frighten superstitious blacks and to prevent identification by the occupying federal troops- whipped, tortured and killed African Americans and sympathetic whites in night time raids. Successful black businessmen were attacked and any attempt to form black protection groups such as trade unions was quickly dealt with by the Ku Klux Klan. The Klan reached its peak between 1868 and 1870. ...read more.

They were now involved in marches, parades, and night time cross burnings all over the country. Not only did membership give it's people identity and importance in society, but also had links to the government, and therefore made an impact in the running of the southern west of the country. It was claimed at this stage, the membership of the Klan had risen to a striking 7,000,000 people. The establishment had become so extensive, that the it had to be divided into eight domains, i.e. eight parts of the country which where going to be run by a Grand Goblin, next in line were the Grand Goblins who had control of the divided domains which were called realms. Under this, were the fellow Kluds and Kleagles, being the majority of its members. It had taken the Ku Klux Klan to create many divisions within itself, to attain control, organisation and to be kept structured. The Klan enjoyed a last spurt of growth in 1928, when Alfred E. Smith, a Catholic, received the Democratic presidential nomination. Since time had passed, from the original set up of the KKK, it had grown to oppose many other cultures, religions and communities besides the African Americans. Alongside them were gypsies, foreigners and communist and radicals. The Klan was also dominated by Protestant Christians, which contrasted Catholics and Jews. ...read more.

In most states, however, federal intervention was required, as the group was so forceful. Although the KKK had connections with the government, it did not persuade every politician to become a member, many congress and liberals were against the Ku Klux Klan, and were determined to bring an end to their enormous establishment. I can know deduce that the Ku Klux Klan were big, were strong, and definitely were sadistic in their time, but they did have many enemies who did not let them achieve White Supremacy throughout the country! But did the Ku Klux Klan make a massive impact to change American History and its people? Yes. It caused many riots, outrages and murders, but still is remembered as one of the popular "social club" of it's time. The role and importance of the KKK was significant in respect that it did bring about a lot of civil rights and changes which benefited the African Americans. As time passed on, many former members redeemed themselves for being involved in such an organisation, and this proved just how potent the force of the Ku Klux Klan was that it had quite the opposite effect to its objectives. As stated, the group still exists today, but in much smaller numbers, and with much more resistance against it. I believe the KKK has been defeated and has made it's mark, but some say it still has unfinished business to attend to, maybe once again, the 'empire' will prevail.......! (Let's hope not!) ...read more.