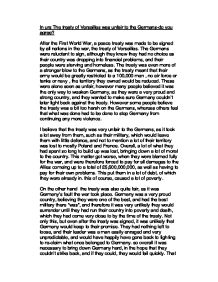 In urs The treaty of Versailles was unfair to the Germans-do you agree?

After the First World War, a peace treaty was made to be signed by all nations in the war, the treaty of Versailles. The Germans were reluctant to sign, although they knew they had no choice as their country was dropping into financial problems, and their people were starving and homeless. The treaty was even more of a stronger blow to the Germans, as the treaty meant that their army would be greatly restricted to a 100,000 men , no air force or tanks or navy , the territory they owned would be reduced. These were alone seen as unfair, however many people believed it was the only way to weaken Germany, as they were a very proud and strong country, and they wanted to make sure Germany couldn’t later fight back against the treaty. However some people believe the treaty was a bit too harsh on the Germans, whereas others feel that what was done had to be done to stop Germany from continuing any more violence.

I believe that the treaty was very unfair to the Germans, as it took a lot away from them, such as their military, which would leave them with little defence, and not to mention a lot of their territory was lost to mostly Poland and France. Overall, a lot of what they had spent so long to build up was lost, bringing down a lot of moral to the country. This matter got worse, when they were blamed fully for the war, and were therefore forced to pay for all damages to the Allies comeing up to a total of £6,600,000,000, as well as having to pay for their own problems. This put them in a lot of debt, of which they were already in. this of course, caused a lot of poverty.

On the other hand  the treaty was also quite fair, as it was Germany’s fault the war took place. Germany was a very proud country, believing they were one of the best, and had the best military there “was”, and therefore it was very unlikely they would surrender until they had run their country into poverty and death, which they had come very close to by the time of the treaty. Not only this, but even after the treaty was signed, it was unlikely that Germany would keep to their promise. They had nothing left to loose, and their leader was a man easily enraged and very unpredictable, and would have happily have gone back to fighting to re-claim what once belonged to Germany. so overall it was necessary to bring down Germany hard, in the hope that they couldn’t strike back, and if they could, they would fail quickly. That is why it was important for the Kaiser to be labelled as a war criminal, along with many important German figures who could attempt any form of up rise or attack, and also it was necessary to reduce a lot of Germany’s army and territory.