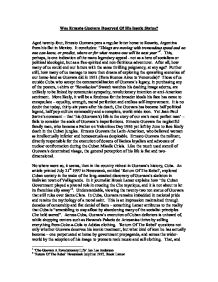 Was Ernesto Guevara Deserved Of His Iconic Status?

Was Ernesto Guevara Deserved Of His Iconic Status? Aged twenty-four, Ernesto Guevara pens a regular letter home to Rosario, Argentina from his flat in Mexico. It concludes: "Things are moving with tremendous speed and no one can know, or predict, where or for what reason one will be next year"1. This, perhaps, is one indication of the mans legendary appeal - not as a hero of socialism or political ideologist, but as a free-spirited and non-fictitious adventurer. After all, how many of us could end our letters with the same thrilling poignancy, at any age? Further still, how many of us manage to more then dream of exploring the sprawling sceneries of our home-land as Guevara did in 1951 (from Buenos Aires to Venezuela)? Those of us outside Cuba who accept the commercialization of Guevara's legacy, in purchasing any of the posters, t-shirts or "Revolucion" Swatch watches his dashing image adorns, are unlikely to be linked by communist sympathy, revolutionary intention or anti-American sentiment. More likely, it will be a fondness for the broader ideals his face has came to encapsulate - equality, strength, moral perfection and endless self-improvement. It is no doubt that today, thirty-six years after his death, Che Guevara has became half political legend, half pop-culture commodity and a complete, world-wide icon. Yet Jean-Paul Sartre's comment - that 'his (Guevara's) life is the story of our era's most perfect man' - fails to consider the scale of Guevara's imperfections. Ernesto Guevara the neglectful family man, who became a Father on Valentines Day 1956 yet left by June to face likely death in the Cuban jungles. Ernesto Guevara the Latin-American, who believed women as intellectually inferior and homosexuals as despicable. Ernesto Guevara the militant, directly responsible for the execution of dozens of Batista loyalists and advocate of nuclear confrontation during the Cuban Missile Crisis. Like the much used stencil of Guevara's determined visage, the general perception of his life is flat and two-dimensional. ...read more.

Guevara displayed similar bravery - and military talent - during the Rebel's first combat assault on La Plata, some small local barracks in East Cuba, then again countless times throughout the revolution. Yet this alone should not single Guevara as an icon. It is questionable why exactly he followed Castro on his revolution. As Jon Lee Anderson contends in his book 'Che Guevara A Revolutionary Life', Batista was not the worst of the Latin American dictators around at the time. He writes "compared with the flamboyant despotism of his Dominican colleague, Batista was a political choirboy"7 in reference to the neighboring Dominican Republic leader Leonidas Trujillo, who had controlled with absolute dictatorship there since the 30s. Since Guevara neither was born nor lived in Cuba prior to joining the revolution, this casts some doubt over the purity of his cause. Surely if his intentions were to aid the suffering classes, he would take his fight where it was most needed. The truth is that Guevara was opportunist in joining the trip the Cuba, lead not by over-bearing moral principle but by a thirst for adventure - a chance to escape what he himself described as a life that had "acquired a monotonous Sunday-style rhythm". The other reason for Guevara's involvement was the strengthened conviction he had acquired in his own political leaning. Before meeting Castro and hearing of his plans for revolution, Guevara had emerged himself in political learning, informed largely by the writings of Marx, Lenin and Mao. His communist tendencies were established long before even Castro came to agree with him. This leads to another question of Guevara's legendary status. Why over Castro did he become a icon? Or even Raul Castro, who played an equal part in the revolution? After all, Fidel had already fought Trujillo in the Dominican Republic and the Cuban revolution was a result of his military planning. ...read more.

Arguably, his actions were that of a political under-dog defending his nation in the only way he could. Even by 1965, having achieved more then most consider imaginable in pursuing an honorable cause, an unhealthy and revered Guevara gave up his comfortable position to once again fight for liberation - just as he had given up his comfortable middle-class roots to fight for Cuba. This time, he traveled in disguise to Africa, assembling troops to fight in the Kinshasa rebellion in the Congo. Though the rebellion failed and Guevara was forced to withdraw, by 1966 he left to lead another revolution in Bolivia. It was here where he would meet the death befitting his legacy - not languishing in wealth in a presidential home, but on the battle-fields of his revolution. Of course there is another theory as to why Guevara would travel on a practically suicidal mission into Bolivia - as Larmer contends, "he had always felt more alive, more Che, when he was fomenting revolution." As Jorge G Castaneda argues in his essay 'Compacero: The Life And Death Of Che Guevara', Guevara's last mission "was doomed from the start"12. Captured by the Bolivian army not long into his campaign, Guevara refused interrogation from the countries officials and the CIA who had long awaited and helped in his demise. After a night of deliberation, Guevara was executed, his hands severed from his body to prove his death and the corpse its self buried in a secret location. With all icons, there is a tendency from both cynics and supporters to place too great an empathies on the persons death. Jimmy Hendrix died young being a rock a roll star, but the criteria for his status as an icon was how he played the guitar. Ernesto Guevara is indeed deserved of his role as an icon, to people of any political persuasion. His legacy is one of exploring, learning and endlessly pursuing the improvement of this world through genuine and practical means - a policy of action sadly redundant in the world today. ...read more.