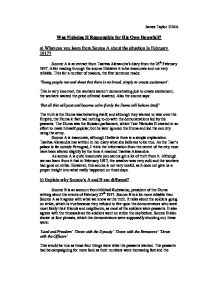 Was Nicholas II Responsible for His Own Downfall? What can you learn from Source A about the situation in February 1917?

James Taylor 11MA Was Nicholas II Responsible for His Own Downfall? a) What can you learn from Source A about the situation in February 1917? Source A is an extract from Tsaritsa Alexandra's diary from the 25th February 1917. After reading through the source I believe it to be inaccurate and not very reliable. This for a number of reasons, the first sentence reads: 'Young people run and shout that there is no bread, simply to create excitement'. This is very incorrect, the workers weren't demonstrating just to create excitement; the workers wanted the price of bread lowered. Also the source says: 'But all this will pass and become calm if only the Duma will behave itself' The truth is the Duma was behaving itself, and although they wanted to take over the Empire, the Duma in fact had nothing to do with the demonstrations led by the peasants. The Duma was the Russian parliament, which Tsar Nicholas II created in an effort to make himself popular, but he later ignored the Duma and led the country using the army. Source A is inaccurate, although I believe there is a simple explanation. Tsaritsa Alexandra has written in her diary what she believes to be true. As the Tsar's palace is far outside Petrograd, I think the information from the centre of the city must have been altered slightly by the time it reached Tsaritsa Alexandra. As source A is quite inaccurate you cannot get a lot of truth from it. Although we can learn from it that in February 1917, the weather was very cold and the workers had gone on strike. However, this source is not very useful, as it does not give us a proper insight into what really happened on those days. b) Explain why Source's A and B are different? Source B is an account from Mikhail Rodzianko, president of the Duma writing about the events of February 27th 1917. ...read more.

The first two sources give us one of the first possible reasons for Nicholas' abdication. As there was no soldiers left in the city to fight the workers the Tsar could no longer control them, and he couldn't draft more in because most of the other soldiers were fighting Germany alongside the Tsar. Also a second reason we can get from the two sources is that as the workers were on strike factories ground to a halt and so no goods were being produced, Nicholas had to solve this fast, the pressure for him to do so was immense as some of the factories in Petrograd produced important supplies for the front line. Source C gives us numerical figures telling us how many workers approximately were on strike during the first few days of the revolution. I believe this to be trustworthy as it agrees with historical fact. This source also backs up the claim that Nicholas was slowly losing control over his capital city. Source D an extract from a British nurse's diary who was working in Petrograd at the time of the revolution tells us of how the tsars soldiers fired upon the people and it goes on to say that nothing now can stop the revolution. Also source E a photograph of soldiers taken on the 27th February showing their mutiny after being forced to fire upon their own kind. The photo shows banners which a said to read 'Down with Tsar. Long live the republic' I believe this source to be trustworthy as it is pictorial evidence and it is unlikely that it has been edited in any way. Again these two sources back up the fact that the Tsar was slowly losing control over the people and there was nothing he could do to stop them apart from meet their demands, as they were the greatest force in Russia. ...read more.

All these reasons contributed to the February Revolution in 1917. Many of the reasons are also closely linked. The tsar had left no reinforcements behind protecting his capital in case of any revolutionary plots, even when Rodzianko recommended that he did take action, the Tsars ignorance kept him form doing so. The same ignorance was seen with Durnovo's memorandum and the threat of revolution if Russia did suffer defeat. If the Tsar had taken action and planned for the future when the first warning of revolution was sewn in Durnovo's memorandum in 1914, the Tsar might have avoided the situation he was faced with in February 1917. Also if the Tsar had planned and prepared for war carefully and not created the huge strain on the industry, he might not have had the workers demonstrating over the price of bread that created a platform for the other problems, the workers and peasants faced, to be shown. All the reasons had a part to play in sparking off the revolution. However, as shown above if you took out or altered some of the causes the revolution might never of occurred. Without Tsar Nicholas' ignorance and lack of planning for war, he could of avoided revolution in February 1917. These reasons I think are the most important as they both sparked of a chain reaction previous to 1917. However, Nicholas' ignorance towards events and peoples advice building up to the revolution has the greater importance of the two as he could of crushed any stirring revolutionaries long before it reached a large scale. In conclusion, I think revolution in Russia was inevitable by 1917. Nicholas' ignorance is the main factor, which led to the revolution. This is evident in many of the sources where he refused to accept people's advice. Although Nicholas' ignorance features in other factors which led, in the short term, to the revolution. It was a character defect, which would have been with him most of life and therefore his ignorance along with other factors made revolution inevitable by 1917. ...read more.

This is a well answered source paper, with many useful comments on provenance and a good understanding of why the revolution occurred. At times, the author could answer the question more directly and offer more explanation of points. 4 out of 5 stars.