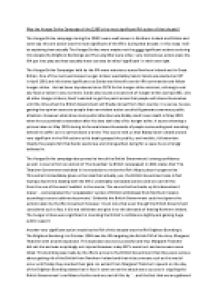 Was the Hunger Strike Campaign of the 1980s the most significant IRA action of that decade?

﻿Was the Hunger Strike Campaign of the 1980?s the most significant IRA action of that decade? The Hunger Strike campaign during the 1980?s were well known in Northern Ireland and Britain and some say this one action was the most significant of the IRA?s during that decade. In this essay I will be exploring how actually The Hunger Strikes were maybe not the most significant actions as during this decade the Brighton Bombings and The Long War were other, very momentous action plans the IRA put into play and how actually these can also be titled ?significant? in their own right. The Hunger Strike Campaigns held by the IRA were notorious across Northern Ireland and in Great Britain. One of the most well known hunger strikers was Bobby Sands. Sands was elected an MP in April 1981 and this bares significance as Sands was himself a senior IRA commander and fellow hunger striker. He had been imprisoned since 1976 for his hunger strike mind-set, refusing to eat any food or taken in any nutrients. Sands also issued a second set of hunger strikes during 1981. Like all other Hunger strikers, Sand?s wanted to get the point across that people will starve themselves until the time when the British Government will finally retreat from their country. ...read more.

This bombing was made by the IRA to prove to the British Government that they were serious about getting rid of the British from Northern Ireland and that vicious means such as this would occur until finally they reached their goal. An extract from Margaret Thatcher?s speech on the day of the Brighton Bombing states that in fact in some sense the attack was a success in crippling the British Government?s confidence further and we can tell this by ? ...and the fact that we are gathered her now, shocked but composed and determined, is a sign not only that this attack has failed, but that all attempts to destroy democracy by terrorism will fail.? Clearly the British Government were completely upstart after this shocking display of violence however it does state that actually they have come back from the attack more ?composed? and ?determined?. Another statement this time from the Provisional IRA states ?Today we were lucky, but remember we only have to be lucky once. You will have to be lucky always.? This source clearly shows the mind-set of IRA at the time as it is written by them themselves so it is highly reliable. Undoubtedly the IRA will keep trying to attack in these violent ways and they will not stop until finally they are ?lucky once? and have killed the PM and caused havoc amongst the B.Government. ...read more.