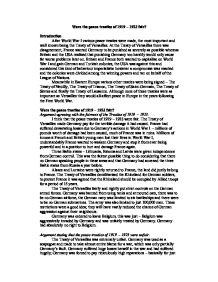 Were the peace treaties of 1919 - 1923 fair? Introduction After World War I various peace treaties were made, the most important and well known being the Treaty of Versailles. At the Treaty of Versailles there was disagreement, France wanted Germany to be punished as severely as possible whereas Britain and the USA realized that punishing Germany too harshly would only cause far worse problems later on. Britain and France both wanted to capitalize on World War I and gain German and Turkish colonies, the USA was against this and considered this kind of behaviour imperialistic however a compromise was reached and the colonies were divided among the winning powers and ran on behalf of the League of Nations. Meanwhile in Eastern Europe various other treaties were being signed - The Treaty of Neuilly, The Treaty of Trianon, The Treaty of Saint-Germain, The Treaty of S�vres and finally the Treaty of Lausanne. Although none of these treaties were as important as Versailles they would all affect peace in Europe in the years following the First World War. ...read more.

Germany had absolutely no right to Belgium. Argument stating that the peace treaties of 1919 - 1923 were unfair: The Treaty of Versailles was extremely unfair. Germany was used as a scapegoat and made to take almost entire blame for a war, which was only partially Germany's fault. Germany suffered huge losses herself in the war and had suffered hugely; Germany was forced to pay ridiculously high reparations - basically for just losing the war. The reparations Germany was forced to pay were enormously high, the German economy had suffered hugely during the war. The huge reparations would only worsen the German economy and cause extreme poverty throughout Germany. Argument stating that the peace treaties of 1919 - 1923 were fair: The Treaty of Saint-Germain was fair and just, Austria was forbidden from ever seeking unification with Germany and her army was limited to 30,000 men. Austria-Hungry was a danger to future peace in Europe and quite rightly a large chunk of Austria was divided into 3 new states - Czechoslovakia, Poland and Yugoslavia. ...read more.

Turkey was also forced to pay large reparations, which it could not afford. Whilst Turkey had lost much of her empire Britain and France were adding to theirs by taking Syria, Israel, Jordan and Iraq - Turkey will have been annoyed at this too. The Treaty of S�vres gave Turkey a very bad deal. The Treaty of Trianon was unfair on Hungry, two thirds of Hungary's territory was lost - this reduced Hungary's population to just 7 million from 18 million. Conclusion Some of the treaties made after WWI probably were unfair however the Treaty of Versailles was not unfair. Germany lost little territory and any punishment that they did receive was probably deserved. Millions of allied soldiers - British and French as well as American soldiers lost their lives fighting a bloody battle that could have been averted had Germany not gone to war. Some of the other European treaties were unfair but to make treaties that left everyone happy and everyone thinking that they were fair would have been impossible. It was difficult enough for three allies - Britain, USA and France to agree on a treaty. ...read more.

This is a strong response that offers a good range of reasons and is balanced by considering both sides of the argument. The sub headings are unnecessary as the author's structure is clear enough and the points are valid but evidence is a little thin in places. 4 out of 5 stars.