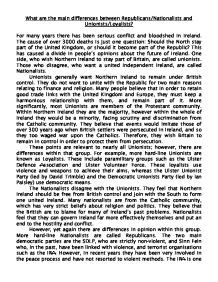 What are the main differences between Republicans / Nationalists and Unionists / Loyalists?

What are the main differences between Republicans/Nationalists and Unionists/Loyalists? For many years there has been serious conflict and bloodshed in Ireland. The cause of over 3000 deaths is just one question: Should the North stay part of the United Kingdom, or should it become part of the Republic? This has caused a divide in people's opinions about the future of Ireland. One side, who wish Northern Ireland to stay part of Britain, are called unionists. Those who disagree, who want a united independent Ireland, are called Nationalists. Unionists generally want Northern Ireland to remain under British control. They do not want to unite with the Republic for two main reasons relating to finance and religion. Many people believe that in order to retain good trade links with the United Kingdom and Europe, they must keep a harmonious relationship with them, and remain part of it. More significantly, most Unionists are members of the Protestant community. Within Northern Ireland they are the majority, however within the whole of Ireland they would be a minority, facing scrutiny and discrimination from the Catholic community. They believe that events would imitate those of over 300 years ago when British settlers were persecuted in Ireland, and so they too waged war upon the Catholics. Therefore, they wish Britain to remain in control in order to protect them from persecution. These points are relevant to nearly all Unionists; however, there are differences within that group. For example, more hard-line Unionists are known as Loyalists. These include paramilitary groups such as the Ulster Defence Association and Ulster Volunteer Force. These loyalists use violence and weapons to achieve their aims, whereas the Ulster Unionist Party (led by David Trimble) and the Democratic Unionists Party (led by Ian Paisley) use democratic means. The Nationalists disagree with the Unionists. They feel that Northern Ireland should be free from British control and join with the South to form one united Ireland. ...read more.

He promised to get rid of extra votes for businessmen and universities. Also, in 1965 he announced that he would build 12000 new houses and create 65000 new jobs by 1970. He also invited the Prime Minister of Eire, Sean Lamass to Belfast for talks. Unfortunately, O'Neill failed to bring reforms quickly enough, and many unsatisfied Catholics became impatient and angry. O'Neill had promised houses and jobs, most of which ended up in predominately Protestant areas. Consequently, the Catholics decided to take action. Inspired by the black people in America, the Northern Ireland Civil Rights Association was formed in February 1967. It aims were: to set up a fair voting system; to defend the freedoms of all citizens and end discrimination (especially in housing and jobs); and to demand guarantees on freedom of speech, assembly and belonging to a trade union. NICRA was not aiming to end partition or overthrow Northern Ireland. It simply wanted to end the discrimination that dominated their lives. Unfortunately, by the late sixties O'Neill had failed to deliver reforms quickly enough. NICRA was forced to take action if they wanted changes. Subsequently, in August 1968 the first civil rights march took place in support of families blighted by poor housing conditions. Protestants began to grow suspicious of these Catholic campaigners; for example Ian Paisley encouraged Protestants not to trust the marchers, as they were out to destroy Northern Ireland. In January 1969 the students from Queen's University of Belfast formed a more radical organisation called the People's Democracy. On New Years Day 1969 they led a peaceful march from Belfast to Londonderry. They passed through a strongly Protestant area provoking violent reactions from unionists and loyalists. At Burntollent Bridge, the marchers were ambushed by Protestant loyalists while police from the RUC looked on doing little to help. When the marchers reached Londonderry, loyalist mobs awaited them. RUC officers and B-Specials went into the Catholic Bogside area, terrorising and destroying everything in sight; smashing shop windows, throwing petrol bombs and singing abusive Protestant songs. ...read more.

Also, due to the length of time it has taken to investigate the events of that day, people loose faith and trust in the British government and again, communities are divided because of their beliefs of what happened. Even when the case is closed, people will still hold resentment to those responsible and forgiveness is going to take a long time to achieve. Orange marches are still causing major problems today. Every summer, members of the Orange Order, a Protestant organisation, take part in marches celebrating victories over Catholics in battles that happened hundreds of years ago. They take their name from the King of England, William of Orange, who defeated the Irish Catholics at the Battle of the Boyne in 1690. Although the marches begin peacefully, they often lead to violence. For this reason they are very controversial. The point of the marches is to antagonise Catholics and Nationalists, by reminding them and gloating about their defeat. To create even more tension, they insist upon marching through strongly Catholic areas, such as Garvaghy Road. This often causes outbreaks of violence from angry Nationalists, consequently resulting in an even bigger divide between the two communities. Another major problem that threatens to undermine the peace process is that sectarianism is being bred into the young children of Northern Ireland. Catholic children are educated separately from Protestant children, reinforcing religious divisions. These young people are educated in a biased way, their minds manipulated by the views of the adults around them who influence everything they think. The only way to break down these barriers before its too late is to educate the children about the views of other cultures, so that they can keep an open mind about things. If Catholic and Protestant children were educated together, so that they learned and consorted with each other every day they would understand their beliefs far better. In the long term, peace and understanding between these young children are the only hope for Northern Ireland's peace process. ...read more.