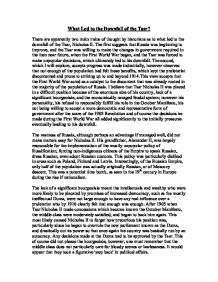 What Led to the Downfall of the Tsar?

What Led to the Downfall of the Tsar? There are apparently two main trains of thought by historians as to what led to the downfall of the Tsar, Nicholas II. The first suggests that Russia was beginning to improve, and the Tsar was willing to make the changes in government required in the then near future, when the First World War began, and the Tsar was forced to make unpopular decisions, which ultimately led to his downfall. The second, which I will explore, accepts progress was made industrially, however observes that not enough of the population had felt these benefits, which kept the proletariat discontented and prone to striking up to and beyond 1914.This view accepts that the First World War acted as a catalyst to the discontent that was already rooted in the majority of the population of Russia. I believe that Tsar Nicholas II was placed in a difficult position because of the enormous size of his country, lack of a significant bourgeoisie, and the economically ravaged feudal system; however his personality, his refusal to responsibly fulfill his role in ...read more.

After 1905 when Tsar Nicholas II made concessions which became known the October Manifesto, the middle class were moderately satisfied, and began to back him again. This most likely caused Nicholas II to forget how precarious his position was, particularly since he began to overrule the new parliament known as the Duma, and drastically cut its power so that once again the country was basically run by an autocracy. Any decisions made at the Duma had to be approved by the Tsar. This of course did not please the bourgeoisie, however, one must remember that the middle class does not particularly care for bloody scenes or lawlessness. It would appear that they took a figurative 'step back' in political affairs. The middle class almost always originates from poverty. Thus one could conclude that a small middle class meant a large peasant/working class population. Although I do not believe that peasants are ever solely responsible for the overthrowing of an ancien regime or a revolution, I do believe they played a significant part in the revolutions in Russia. ...read more.

Newspapers and cartoonists of the day also insinuated an extramarital affair between them, heightening the sense of dissatisfaction already rife among the people of Russia. By this stage, any move the Tsar could have would have been the wrong decision, and the loss at the Front with him in charge caused people to hold him personally responsible, be it fair or not. His decision to order his soldiers to fire at protesters in Petrograd was a point of no return, now he was clearly an enemy the people could unite against, and this they did. The downfall of the Tsar was inevitable, I believe, as soon as he made it clear that he was not interested in any form of government other than an autocracy. However, many factors contributed towards the actual onset of the 'overthrow', one of the main ones being the First World War and the way he handled it. Ultimately, downfall was inevitable in any ancien regime that did not move forward in the 'natural progression' (according to Karl Marx) of things, as was seen in France, and later on, Russia. ...read more.