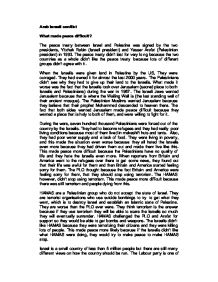 What made peace hard in the Arab-Israeli conflict

Arab Israeli conflict What made peace difficult? The peace treaty between Israel and Palestine was signed by the two presidents, Yitzhak Rabin (Israeli president) and Yasser Arafat (Palestinian president) in 1993. The peace treaty didn't last for very long because the two countries as a whole didn't like the peace treaty because lots of different groups didn't agree with it. When the Israelis were given land in Palestine by the US, They were outraged. They had owned it for almost the last 2000 years. The Palestinians didn't see why they had to give up their land to the Israelis. What made it worse was the fact that the Israelis took over Jerusalem (sacred place to both Israelis and Palestinians) during the war in 1967. The Israeli Jews wanted Jerusalem because that is where the Wailing Wall is (the last standing wall of their ancient mosque). The Palestinian Muslims wanted Jerusalem because they believe that their prophet Mohammed descended to heaven there. The fact that both sides wanted Jerusalem made peace difficult because they wanted a place that is holy to both of them, and were willing to fight for it. During the wars, seven hundred thousand Palestinians were forced out of the country by the Israelis. They had to become refugees and they had really poor living conditions because most of them lived in makeshift huts and tents. Also, they had poor water supply and a lack of food. They were living in poverty, and this made the situation even worse because they all hated the Israelis even more because they had driven them out and made them live like this. ...read more.

Bush (USA president) wanted to keep the Saudi Arabia and Egypt on his side so the other countries would be more sympathetic towards the Palestinians. This made the peace treaty more likely because then the Palestinians would be more willing to make peace because this put pressure on the Israelis to make peace. The members of Likud believe that the entire country of Israel should be theirs, and there should be no form of division of it for the Palestinians. They are not willing to make peace and share their land with the Palestinians at all. The Labour party thought that Jerusalem should still belong to the Jews, but they still thought they should give some land back to the Palestinians in return for peace. When Arafat and the PLO heard of this proposition, they accepted this resolution, and they had high hopes at the prospect of peace after nearly 40 years of constant negotiating. The PLO gave up using terrorism and their plan of trying to drive the Israelis into the sea because they now knew it wouldn't work. This made peace more possible because they were no longer killing people unnecessarily. Another reason why this made peace more possible was because no one would have sat down at a table if Yasser Arafat was there, because he was the leader of the PLO, which was the terrorist group. Another reason why peace was more possible was because reporters went over to where the refugees lived and found out how they had to live. ...read more.

Also in Palestine lots of things changed. The PLO stopped terrorism because people found out how the refugees were living, which made peace possible because they weren't killing loads of the opposite side. This was quite an important reason because if the PLO hadn't given up terrorism, no one would have sat down at a table with Yasser Arafat and tried to make peace if he was the leader of a terrorist group. Also the fact that HAMAS were becoming more popular in Palestine made Yasser Arafat want to do something good so he would be more popular again, and people would listen to him and not to HAMAS. This was not as much an important reason as the other reasons because Yasser Arafat would have wanted peace anyway, no matter whether HAMAS was going to carry on with terrorism. Also this was not as important because HAMAS didn't originally sign the peace treaty, so they were not really part of the agreement. They only made peace more difficult after the treaty had been signed. Overall both the Israelis and the Palestinians had something in their society that changed to make the peace treaty work. Some things still didn't work out though because although the PLO stopped terrorism, HAMAS still used it. Also, even though the labour party won in 1992, the Likud party won the next election. The Likud were not in favour of peace so this did not work out because the Likud spent vast amounts money on the army again. ...read more.