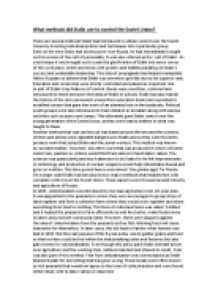 What methods did Stalin use to control the Soviet Union?

﻿What methods did Stalin use to control the Soviet Union? There are several methods Stalin had introduced to obtain control over the Soviet Union by directing individual policies and techniques into a particular group. Early on the time Stalin had seized power over Russia, he had immediately brought out his version of the cult of personality. It was also referred as the 'cult of Stalin'. As a technique it was brought out to push the glorification of Stalin into every corner of the work place, street and home with posters and leaflets parading on Stalin's success and undeniable leadership. This idea of propaganda had helped manipulate fellow Russians to believe that Stalin was somehow god-like due to his superior rank. Education and censorship were strictly controlled and played an important role in part of Stalin's key features of control. Books were rewritten, censored and introduced to teach everyone the ideas of Stalin in schools. Stalin had also had all the history of the old communists erased from education books and reprinted to modified version that gave him more of an elevated role in the textbooks. ...read more.

These aspects were focused around industry and agriculture of Russia. In 1929, collectivization was introduced to increase agriculture over a 5-year plan. It was appointed to the peasants in whom they were encouraged to group strips of land together and form a collective farm where they would work together and share everything from food to clothing. This form of collective farms was called ' Kolkhoz' and it helped the peasants to farm efficiently as well live better, make Russia more modern and promote communist ideas. However, there were disputes against the idea of collectivization from the peasants as they felt rationing food will cause starvation for themselves. In later cases, this did lead to famine when harvest was bad in 1932. But the real purpose of this 5-year policy was to gather grains and food so that workers could be fed within the industrializing cities and factories but also gain money for industrialization. Even though this policy gave Stalin ultimate power over agriculture and the working class, millions had died and starved in result. ...read more.

The Gulag was also a feature part of industrialization, however workers were expected to live less than 2 years in the forced labor camp. Following on, this method did involve propaganda to encourage potential workers to join in the plan through a propaganda story of Stakhanov; a hard working employee. Stalin had run this plan 3 times all of which did not meet all of its aims and targets but he did gain a developed control over the work force. In overall, Stalin had created and introduced numbers of methods, whether they were forced or ideas to catapult him to more control over the Soviet Union. He had also targeted different groups from children to farmers in order to build power nation wide through propaganda and fear. This in summary had made him more superior for he controlled what was produced and how it could be used within the country so Russia could develop into an independent country. Even though some methods were unsuccessful they were very effective in favor of Stalin and his rule of power. ...read more.