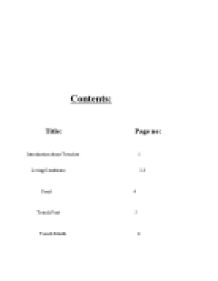 ﻿Contents: Title: Page no: Introduction about Trenches 1 Living Conditions 2-3 Food 4 Trench Foot 5 Trench Mouth 6 Trench Fever 7 Shell Shock 8 Rats 9 Lice 9-10 Conclusion 11 What were the Trenches? The trenches were the front lines, the most dangerous places. In every Trench there was a heap of supply lines, training foundations, stores, workshops, command centres and many other basic fundamentals that were needed in the war. The trenches were the area of the infantry (foot soldiers). Trenches were dug into the ground, so that the infantry would have some protection from the enemy. Also when bullets were fired from a machine gun, they would mainly be fired in straight line so therefore they wouldn?t go underground to where the trenches were. What were Trenches like? Most of the trenches had the same system ongoing even the enemies. Everything depended on the position of the Trench as it mattered if the ground could be easily dug and whether it was strong enough when it rained. Conditions in the trenches during WW1 were horrendous. Better trenches would be about seven feet deep and 4-6 feet wide. Sand bags would be lined against each other along the sides of the trenches or they would be by the wall like latticework (criss-crossed) like hazel branches a bit like an obstacle course. There would be wooden planks laid on the floor as a foundation base as the ground was muddy due to when it rained. On the edge of the trench there would be sandbags as well as barbed wire. Regularly, allied and the enemy trenches would be approximately fifty feet apart. There were dugouts dug into the Earth to provide shelter when there wasn?t much fighting but they were mainly the only shelters. In summer the trenches were exposed to the hot sun and in winter were exposed to snow and rain. ...read more.

It resulted in high fever, severe head aches and serious pains in the legs and back. It takes about 5 days for the disease to start taking affect. Recovery takes about a month or two. It was transmitted by body lice. This disease was bad, because of the time that it took to recover. In rare cases people could die from this disease. The stages of the infection are as follows. Firstly, the infected foot or feet may become numb caused by erythrosis (skin turning red) or cyanosis (skin turning blue). Further to this, the infected area may begin to have a rotten smell, due to the start of necrosis (the death of cells in tissue or organ caused by disease). As the condition worsened, the feet began to swell. The advanced cases of Trench Foot often included blisters and open sores which led to fungal infections. If the skin is left untreated, the end result would often be gangrene, which ultimately led to amputation. Despite this, if treated properly and quickly, complete recovery is certain. The interesting fact about Trench Foot is that unlike frostbite, Trench Foot does not require freezing temperatures and can occur in temperatures up to 60 Fahrenheit. The condition presents itself in as little as eleven hours. During the opening stages of World War One, some 20,000 casualties resulted from Trench Foot in the British Army. ?My memories are of sheer terror and the horror of seeing men sobbing because they had trench foot that had turned gangrenous. They knew they were going to lose a leg. Memories of lice in your clothing driving you crazy. Filth and lack of privacy. Of huge rats that showed no fear of you as they stole your food rations. And cold deep wet mud everywhere. And of course, corpses. I'd never seen a dead body before I went to war. But in the trenches the dead are lying all around you. ...read more.

The lice problem was never determinedly tackled by the military authorities given that its connection with Trench Fever was not recognized until the final year of the war. ?The things lay in the seams of the trousers. A lighted candle applied where they were thickest made them pop like Chinese crackers. After a session of this, my face would be covered with small blood spots from extra big fellows that had popped to vigorously.? The problems of lice in the trenches Conclusion: I conclude that Life in the Trenches was appalling. Whether you survived the war or were not you were most likely to come remember the trenches with either an emotional or mental disturbance, or a physical disturbance. Life was pretty gruesome with all the rats feeding on you and the lice sucking your blood. Pretty much wherever you went there was an awful stench either coming from the places that were used as latrines or from piles of dead bodies. At least someone every day had a painful day, as there was trench foot, rats feeding off you, Trench fever, Trench Mouth. Some were even driven to kill themselves as they couldn?t bear life in the trenches. The worst of everything in the trenches was shell shock as it left you with physcological trauma. A few victims recovered from it with a dangerous an ancient treatment. There was always a daily routine but living underground wasn?t anything like living in a nice comfy home. There wasn?t a sanitation system, no way of hygiene, food that had to be rationed. Even if you had nice hot food (which was rarely available) you couldn?t eat it in comfort as there would be the sound of bombings, unclean environment, and an awful stench of dead bodies. Life in the trenches was the worst life anyone could live and I am sure most people regretted being a soldier. Cross-section of a World War 1 Trench World War 1 British Trench Soldiers picking Lice from their clothes Symptoms of Trench Fever ...read more.