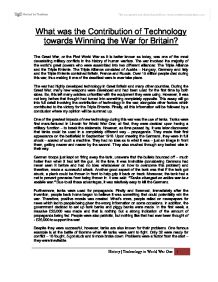 What was the Contribution of Technology towards Winning the War for Britain?

What was the Contribution of Technology towards Winning the War for Britain? The Great War, or the First World War as it is better known as today, was one of the most devastating military conflicts in the history of human warfare. The war involved the majority of the world's great powers who were assembled into two different alliances: The Triple Alliance and the Triple Entente. The Triple Alliance consisted of Austria - Hungary, Germany and Italy and the Triple Entente contained Britain, France and Russia. Over 15 million people died during this war, thus making it one of the deadliest wars to ever take place. The war had highly developed technology in Great Britain and many other countries. During the Great War, many new weapons were developed and had been used for the first time by both sides. So, this left many soldiers unfamiliar with the equipment they were using. However, it was not long before that thought had turned into something completely opposite. This essay will go into full detail involving the contribution of technology in the war, alongside other factors which contributed to the victory for the Triple Entente. Finally, all this information will be followed by a conclusion where my opinion will be summed up. One of the greatest impacts of new technology during this war was the use of tanks. Tanks were first manufactured in Lincoln for World War One; at first, they were decided upon having a military function - to break the stalemate. ...read more.

It could take up to a staggering four or five weeks to do! The opposition were covered with blisters and was burnt all over. Also, it blinded many people and left them fighting for their breath. Even though people had wore gas masks, if it had touched bare skin. It would've done some serious damage. All this damage would have left them literally useless in the war. . It could be used when no attack was imminent and forced soldiers to put on crude gas masks which hampered mobility and were difficult to fight in. Although, it did have its drawback - quite sever ones in this case. Probably the biggest disadvantage was that the gas was too dependent on the weather conditions. If the wind blew in the wrong direction, the poison would fall back into your own trenches and result in friendly casualties. Furthermore, it could easily be prevented; you just had to wear gas masks. After 1916, it wasn't very effective at all - only 3% of gas victims died and the rest were able to return to duty. The machine gun was one hell of a weapon. It most certainly had a huge impact on the war and without them, the war will still be going to today (metaphorically). They were developed towards the end of the 19th century and could fire very rapidly. The bullet was about 7 to 8 bullet per second. ...read more.

Furthermore, Woodrow Wilson had ordered 2000 planes per month to be sent to the Western Front. This greatly assisted the Triple Entente and as a result, started up high morale. Many would say that this factor completely destroyed the Germans. Moving on, the contribution of the troops in the British Empire helped them a lot in the war. Around 1914, the British realised their army would get absolutely smashed if they were to take on the Central Powers. However, the army was supported and increased to a larger size when troops from Canada, New Zealand, Australia and South Africa arrived to help their friends. In addition to that, more soldiers joined from African Colonies and from the Indian army. This meant that due to the help of the extra soldiers, the British army was able to fight competently with the Germans. The Germans underestimated the ability of the British army to be a threat anywhere other than on the sea but were highly mistaken when the British were engaging the Germans on the Western Front. If you were to compare the leadership of the Triple Entente to the Triple Alliance, there would be a great difference. The Allied Force had great leaders; here are a few: - Georges Clemenceau, the French prime minister during the war, - Lloyd George, the British prime minister and, - Woodrow Wilson, the president of the USA who joined the war during the final year. ?? ?? ?? ?? History | Technology in World War One 1 ...read more.