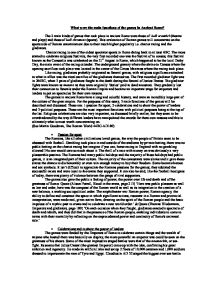 What were the main functions of the games in Ancient Rome?

What were the main functions of the games in Ancient Rome? The 2 main kinds of games that took place in ancient Rome were those of ludi scaenici (theatre and plays) and those of ludi circenses (sports). This evaluation of Roman games will concentrate on the sports side of Roman entertainment due to their much higher popularity i.e. chariot racing and the gladiators. Chariot racing is one of the oldest spectator sports in Rome dating back to at least 6BC. The races started to celebrate religious festivals, the very first recorded one was the festival of to consus, this festival known as the Consualia was celebrated on the 21st August in Rome, which happened to be the local Derby Day, the main event of the racing calendar. The underground granary where the shrine to Consus where the opening sacrifices took place was located in the center of the Circus Maximus where the racing took place. Like racing, gladiators probably originated as funeral games, with religious significance attached to what in affect was the ritual sacrifice of the gladiators themselves. The first recorded gladiator fight was in 264BC, when 3 pairs of gladiators fought to the death during the funeral of Junius Brutus. ...read more.

* Celebrations and to show the power of leaders The games were funded by the Emperors of Rome to celebrate certain things and the wealth of anyone who hosted them was basically on display, the more powerful an emperor was could be seen on the greatness of his shows. Some of the most impressive staged battles were that of the naumachia, or sea-fight. Its seems that Julius Caesar (the greatest Emperor) came up with the idea, confirming his great ambition and ingenuity. He made an artificial lake and set up 2 fleets of 10,000 oarsmen and 1,000 soldiers dressed to impersonate the men of Tyre and Egypt. Claudius in AD 52 staged the biggest ever sea-battle. The lake took 11 years and 30,000 men to construct and the bloody battle consisted of 19,000-armed contestants in 2 naval fleets, missiles and catapults of fire were bombarded on them. The winning survivors were excused execution. These powerful shows of blood showed the emperor Claudius to the people as an incredibly clever and powerful man, no one could take him on and win. The Emperor Nero became leader in AD 54; an ex-wife poisoned Claudius after she persuaded him to adopt Nero. Claudius had great victories and his sea-battle proved his greatness; he took on Europe, but couldn't escape his ex! ...read more.

Alison Futrell, Blood in the Arena, argued that the problems of the empire weren't sugarcoated, as they were too important to just be forgotten by putting on a show. The political function was to reinforce the might and strength of the roman army, thus showing the people that they weren't strong enough to take them on. Quote (p 212)' The ritual performance in the arena was a means of Imperial control through directed attitudinal change, the creation and manipulation of mass emotional response, renewed regularly at the behest of the ruling hierarchy.' Thomas Wiedemann, Emperors and Gladiators, found it too hard to believe that the games could be effective by proving the armies absolute power and to divert political opinions. Quote (p 169)' [A]ttendance at munera subjected emperors to pressure from the people, rather than diverting potential expressions of political will in other directions.' This book explains how Tiberius tried to keep away from the games to escape the pressures, but it was so unpopular that later Emperors didn't make the same mistake. Quote (p 169)' When an emperor was at Rome, then his personal presence at munera was expected. An emperor who was unpopular might be criticized either for being too interested in these games, or not interested enough: the tightrope which each emperor had to walk was a necessary consequence of the ambiguous position of the emperor as both autocrat and servant of the Roman people. . . .' ...read more.