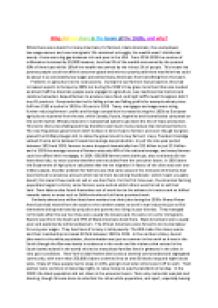 ﻿Who did not share in the boom of the 1920s, and why? While there was a boom for many Americans, for farmers, black Americans, the unemployed, low wage-earners and new immigrants? life remained a struggle, the wealth wasn?t distributed evenly - there was a big gap between rich and poor in the USA. From 1914-1928 the number of millionaires increased by 28,000 however, less than 5% of the wealth was owned by the poorest 60% of Americans whilst 16%of the wealth was owned by the richest 1% of people. This meant the poorest people could not afford consumer goods and were so poorly paid there was little they could do about it as consistently low wages prevented many Americans from benefiting from the boom. Problems in agriculture led to rural poverty. During the war farmers had prospered, they had increased exports to Europe by 300% but during the 1920?s they grew more food than was needed as almost half the American people were engaged in agriculture, new machines like tractors and combine harvesters helped farmers to produce more food, and high tariffs meant foreigners didn?t buy US products. ...read more.

Many African Americans had moved from the south to the northern states to work in war industries just to find themselves being restricted by prejudice and poverty into living in poor districts. They managed to find jobs after the war but they were usually the lowest paid, the same is true for immigrants. Racism was rife in the South and 75% of Black Americans lived there. Black Americans were usually poor and exploited by white landowners. The African Americans were forced to do menial labour for very poor wages. They lived lives of misery in total poverty. The KKK made this misery worse and their membership increased 50 fold between 1920 to 1925. In the northern states, decent jobs went to the white population, discrimination was just as common in the north as it was in the South (though the Klan was barely in existence in the north and the violence that existed in the South barely existed in the north) this led to many black families lived in ghettoes in the cities in very poor conditions. New York's black Harlem district was a severely overcrowded and segregated community, with more than 250,000 citizens crammed into an area 50 blocks long and eight blocks wide. ...read more.

In 1920 the wartime cotton boom collapsed and in 1921 the boil weevil destroyed 30% of the crop however in the mid-1920s the cotton industry over produced causing prices to plunge. In 1929 a coal miners wage was barely a third of the national average income. There were also problems in the textiles industry, where 'flapper' fashions were reducing the amount of cloth used to make clothes. As not many companies? increased wages as product prices increased it meant that for low-wage earners and the unemployed the 1920?s was a really difficult time financially. Unemployment was starting to become a huge problem. By the end of the 1920s nearly a quarter of the workforce were unemployed- 14m people, especially in the industrial cities of the north. Many people became known as hobos. As a consequence of unemployment many people also became homeless. People who had borrowed ?on the margin? to buy shares lost out in 1929 and their homes were repossessed. In 1929 250,000 people lost their homes. Some people ended up on the street and park benches. Others created shanty towns which were nicknamed ?Hoovervilles? after the president at the time Herbert Hoover, although some people were helped by charities such as the Salvation Army this was only temporary halt to the suffering of many Americans. ...read more.