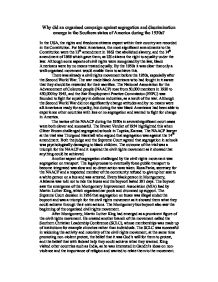 Why did an organised campaign against segregation and discrimination emerge in the Southern states of America during the 1950s?

Why did an organised campaign against segregation and discrimination emerge in the Southern states of America during the 1950s? In the USA, the rights and freedoms citizens expect within their country are recorded in the Constitution. For black Americans, the most significant amendments to the Constitution were the 13th amendment in 1863 that abolished slavery, and the 14th amendment of 1868 which gave them, as US citizens the right to equality under the law. Although some aspects of civil rights were recognised by the law, black Americans were by no means treated equally. By the 1950s it was clear that only a well-organised movement would enable them to achieve this. There was already a civil rights movement before the 1950s, especially after the Second World War. The war made black Americans who had fought in it aware that they should be rewarded for their sacrifice. The National Association for the Advancement of Coloured people (NAACP) rose from 50,000 members in 1930 to 450,000 by 1945, and the Fair Employment Practice Commission (FEPC) ...read more.

The Montgomery bus boycott also saw the beginning of the organised civil rights movement. After Montgomery, Martin Luther King had emerged as a prominent figure of the civil rights movement. He created another branch of the movement called the Southern Christian Leadership Conference (SCLC), whose memberships was made up of institutions for example churches rather than individuals. The SCLC was successful in widening the activity and notoriety of the civil rights movement, at the same time promoting non-violent protest, the belief that it was God's will for them to protest, and the belief that with federal help they could achieve what they wanted. King visited other countries such as India, as he was interested in Gandhi's ideas on non- violence and the importance of religion and wanted to relate them to the movement. King had become a clear leader of the civil rights movement who had charisma, good ideas and provided a well-funded and successful organisation. Another reason that an organised campaign emerged was that black Americans knew from experience that they could not rely on politics to help them in their struggle as they were often neglected and knew that they had to do things for themselves. ...read more.

It became apparent that despite changing laws, whites is the South were still prepared to ignore the law and a large proportion of the crime went unpunished. Due to this, an organised movement was essential, as it needed to be effective despite white resistance. I think that an organised campaign against segregation and discrimination in the Southern states emerged during the 1950s largely due to the political inactivity and the lack of support black Americans were receiving from both the president and the law. I think that the reason the movement came about during the 1950s and not before was because black Americans had raised expectations due to the actions of Truman on civil rights issues, only to find them not fulfilled by his successor. Success in some aspects of the movement such as removing segregation in schools and on transport had only been recognised by the law after protests by black Americans. I think it became clear to them that to get what they wanted they needed to find an effective way of protesting for it and to do this they needed an organised movement. Black Americans were inspired by the success of past campaigns and this made them determined to campaign until they had achieved equality. Chloe Hunter ...read more.