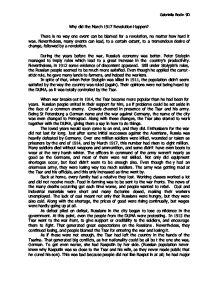 Why did the March 1917 Revolution Happen?

Why did the March 1917 Revolution Happen?

There is no way one event can be blamed for a revolution, no matter how hard it was. Nevertheless, many events can lead, to a certain extant, to a tremendous desire of change, followed by a revolution.

During the years before the war, Russia’s economy was better. Peter Stolypin managed to imply rules which lead to a great increase in the country’s productivity. Nevertheless, in 1912 some evidence of discontent appeared.  Still under Stolypin’s rules, the Russian people seemed to be much more satisfied. Even though he applied the carrot-stick rule, he gave many lands to farmers, and helped the workers.

In spite of that, when Peter Stolypin was killed in 1911, the population didn’t seem satisfied by the way the country was ruled (again). Their opinions were not being heard by the DUMA, as it was totally controlled by the Tsar.

When war breaks out in 1914, the Tsar became more popular than he had been for years.  Russian people united in their support for him, as if problems could be set aside in the face of a common enemy.  Crowds cheered in presence of the Tsar and his army. Being St Petersburg a German name and the war against Germany, the name of the city was even changed to Petrograd. Along with these changes, the Tsar also started to work together with the DUMA, giving them a say in how to do things.

The loved years would soon come to an end, and they did. Enthusiasm for the war did not last for long. Just after some initial successes against the Austrians, Russia was heavily defeated by Germany. Over one million soldiers were killed, wounded or taken as prisoners by the end of 1914, and by March 1917, this number had risen to eight million. Many soldiers died without weapons and ammunition, and some didn’t have even boots to wear at the very harsh winter. The officers in command of the army weren’t nearly as good as the Germans, and most of them were not skilled. Not only did equipment shortages occur, but food didn’t seem to be enough also. Even though they had an enormous army, they were losing way too much soldiers. The army was getting mad at the Tsar and his officials, and this only increased as time went by.

Back at home, every family had a relative they lost. Working classes worked a lot and did not receive much. Food in farming was to be sent to the war fronts. The news of the many deaths occurring got each time worse, and people wanted to rebel.  Coal and industrial materials were short and many factories closed, making their workers unemployed. The lack of coal meant not only that Russians were hungry, but they were also cold. Along with the shortage, the prices of good were rising continually, but wages were hardly going up at all.

As defeat piled on defeat, Russians in the city began to lose confidence in the government. At this point, even the people from the DUMA were protesting. In 1915 the Tsar went to the war front, to give support or credibility to the soldiers, and encourage them to fight. That generated great expectations on the Russians. Nevertheless, they continued losing, and people blamed the Tsar for entering the war and losing it.

As if these were not enough, the Tsar had left the country in the hands of the Tsarina. That generated big conflicts, as her nationality could be all but the one she was, German. To get even worse, she had Rasputin by her side. (Russian population never knew why Rasputin was so close to the Tsar and his wife, as they never made public that he cured his son). This was bad because people did not like Rasputin at all; he had major influence in the Tsar and his wife. Even the DUMA was against him. People thought he worked for Germany, and ended up killing him. Along with that, the Tsarina did not work with the parliament. Together with Rasputin, they ignored the DUMA. When the Tsar received letters telling how things were, she would soon send another one saying everything was actually great, and she had a great power on the Tsar.

By March 1917 the mistakes of the Tsar were no longer bearable; the situation had become desperate and there was a serious mood of discontent. Political changes were once again claimed, together with more food and fuels.

On 7 March, 40,000 workers from the giant Putilov engineering works, in Petrograd, went on strike for higher wages. Being the next day the International Women’s day, thousands of women joined the strikers in demonstrations all over the city, shouting “DOWN WITH HUNGER! BREAD FOR THE WORKERS!” The following days counted with the support of other thousands of Russians, in demand for food, fuels, better conditions and a new government. The Tsar ordered that to be put down by force; after all, there had been riots before. However, Rodzianko, leader of the DUMA, advised him that the situation was at a crisis point. The Tsar could not regret more his wrong decision of not listening to him.

Even with all these things against him, the Tsar’s downfall would only come when the army turned the other way too. 4 days after the women’s protest, the soldiers in Petrograd refused to fire on crowds, and some even shot their officers and joined the Protestants. Strikes had gone on before, but this was different. Without the soldiers’ help, the Tsar would not be able to continue in power. Strikers in the street marched to the DUMA and demanded that they took control of the government.

In March 15 the Tsar decided to abdicate in favour of his brother Michael. Not only did his brother not care at all, but people had had enough of the royal family. The revolution lead to the formation of the Provisional Government. This was formed by people from the DUMA and some of the Liberals.

As I commented on the first paragraph, we cannot blame the revolution totally on one event, as the war. In my opinion, each of the Tsar’s acts resulted on this. He had made mistakes himself for many years. This is clear and evident, as in 1905 another revolution was held, and all the Tsar did was the formation of the DUMA, which actually acted on nothing. People continued mad. The Tsar thought that the patriotism of being in the war would get it all set, and it did, until they lost it all. Then comes Rasputin and the Tsarina, and the discredit of people. Situation gets to its final point when the army turns against him. I think that the revolution was postponed for a certain period of time, but even Tsar Nicholas knew that it would come. It was unstoppable, the main problem was having an absolute monarchy, and Russia was way too big to be controlled by one person alone. Therefore, I conclude that the failures of the Tsar before and after the war lead to this, but the war was the turning point.