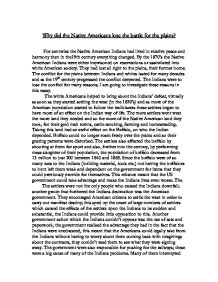 Why did the Native Americans lose the battle for the plains?

Why did the Native Americans lose the battle for the plains? For centuries the Native American Indians had lived in relative peace and harmony then in the19th century everything changed. By the 1870's the Native American Indians were either imprisoned on reservations or assimilated into white American society. They had lost all right to the plains, their former home. The conflict for the plains between Indians and whites lasted for many decades and as the 19th century progressed the conflict deepened. The Indians were to lose the conflict for many reasons; I am going to investigate these reasons in this essay. The white Americans helped to bring about the Indians' defeat, virtually as soon as they started settling the west (in the 1820's) and as more of the American population started to follow the trailblazers these settlers began to have more of an effect on the Indian way of life. ...read more.

The government were also responsible for pushing for the railways; these were a big cause of many of the Indians problems. Many of them interrupted the grazing of the buffalo and went onto the some of the Indians reservations. This caused the Indians to attack the settlers and railway companies, therefore breaking the peace agreements in place. The army was then called in to protect the settlers, the army defeated the Indians and then the Indians were forced by the government to sign more peace treaties which they might then break, this continued in a vicious circle with the Indians always being forced by the government to sign away more land and rights in the peace treaties. Although I have previously talked about other people causing the Indian downfall, the Indians themselves played a major part. To start with, they were un-united; the whites could easily communicate amongst themselves, whereas the Indians did not have that technology and were always fighting amongst themselves. ...read more.

so the Government then took advantage of the naive and uneducated nature of them by getting them to sign various acts and documents (as I mentioned previously). These acts entitled the government to take the Indians land, by the time the government passed the acts putting the Indians into allotted land, or reservations they stood little chance of ever getting the plains back, they had handed all power to the whites at the start of the battle and so by now had little say in their own futures. The Indians won some great battles, such as the battle of little bighorn, but these just caused the Government to come back with more power and hit harder. Although to begin with the Indians fate was in their own hands they wasted this opportunity to hold onto the plains through their naivety and from then onwards their fate was in the hands of the Settlers and government. It was when the Indians lost the power over their destinies that their fate was doomed; control had been lost to a powerful, relentless enemy with resources and manpower, defeat was unavoidable. Helen Crutcher ...read more.

This is a very confident and detailed answer. The key strength is that it is really sharply focussed on the issue in the question and shows an excellent level of knowledge and understanding. On the whole the points are supported by accurate and relevant factual detail and it important to remember not to slip in to generalisations.