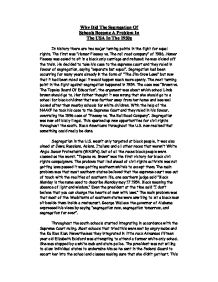 Why Did The Segregation Of Schools Become A Problem In The USA In The 1950s In history there are two major turning points in the fight for equal rights. The first was "Homer Plessey vs. The rail road company" of 1986. Homer Plessey was asked to sit in a black only carriage and refused; he was kicked off the train. He decided to take his case to the supreme court and they ruled in favour of segregation, saying "separate but equal". Segregation had been occurring for many years already in the form of "The Jim Crow Laws" but now that it had been ruled legal it would happen much more openly. The next turning point in the fight against segregation happened in 1954. The case was "Brown vs. The Topeka Board Of Education", the argument was about which school Linda brown should go to. Her father thought it was wrong that she should go to a school for black children that was further away from her home and less well looked after than nearby schools for white children. With the help of the NAACP he took his case to the Supreme Court and they ruled in his favour, overruling the 1896 case of "Plessey vs. ...read more.

Since over 60% of the bus users were black when the boycott started the bus companies started going out of business. In December 1956 the courts decided that segregation on the buses was not legal and the buses were officially desegregated. This was a major victory for the NAACP. They may have only ended segregation on the buses in Montgomery, but it showed black Americans in the south what organised non-violent protest could achieve. Segregation was a lasting issue in the U.S.A until the late 60's. Segregation had been started off in the middle of the 19th century. After the civil war had been won by the north in 1865 the southern and northern states of America remained divided over the issue of slavery. This is why most black Americans migrated north in hope a better standard of living. They would no longer be treated as the second rate citizens as they had been in the south. But when they got to north it was a whole different story. In the north they weren't much better off but at least there was not such a high chance of them being lynched or attacked, there was still a very fine balance between black American progress and the constant threat of white discrimination. ...read more.

The blacks had been allowed to vote since 1870 but were unable to because they had to be able to pass a literacy test and answer questions like "how many bubbles are there in a bar of soap?" The Civil Right Act of 1964 gave Negroes some part of their rightful dignity, but without the vote it was dignity without strength. * The Vote For Blacks was very hard to get due to very hard literacy test that only a handful of well educated men knew how to answer. All these factors helped against segregation thanks to the strong media coverage broadcasting worldwide. Politicians like George Wallace continued to back segregation in the hope to keep the votes of white people who also believed in segregation. The Topeka vs. Brown case was very important because it lead black Americans to believe that they had the power to desegregate America which lead to segregation ending in 1965. It ends the discrimination of anyone due to the colour of their skin in a public place. The President of the United States of America John F. Kennedy realised if the USA wanted to stay one of the world's super powers then politicians would have to change their views on segregation. ...read more.