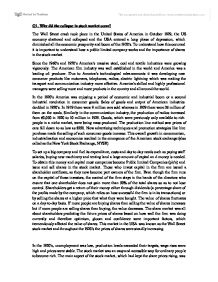 Why did the stock market collapse in 1929?

Q1. Why did the collapse in stock market occur? The Wall Street crash took place in the United States of America in October 1929, the US economy shattered and collapsed and the USA entered a long phase of depression, which diminished all the economic prosperity and boom of the 1920's. To understand how this occurred it is important to understand how a public limited company works and the importance of shares in the stock market. Since the 1960's and 1970's America's massive steel, coal and textile industries were growing vigorously. The American film industry was well established in the world and America was a leading oil producer. Due to America's technological advancements it was developing new consumer products like motorcars, telephones, radios, electric lightning which was making the transport and communication industry more effective. America's skilled and highly professional managers were selling more and more products in the country and all around the world. In the 1920's America was enjoying a period of economic and industrial boom or a second industrial revolution in consumer goods. Sales of goods and output of American industries doubled in 1920's. In 1919 there were 9 million cars sold whereas in 1929 there were 26 million of them on the roads. ...read more.

Investors thought that the boom in America was going to last for ever and there would be no recession or inflation in the economy. Investors were overconfident of the future because till 1929 the output of goods and share values was increasing rapidly however significant flaws and weaknesses were emerging in the US economy. By 1929 US industries were running out of customers who could buy their product. The market for consumer goods was saturated as everyone who wanted a car or a fridge had one. European countries had put up their trade tariffs and barriers due to which there was a surplus of overproduced manufactured goods. In 1929, America had 6 million speculators. Speculation was a clever and sophisticated way of gambling. Speculators did not intend to keep the shares for long. They borrowed money to purchase shares and as soon the share value increased they would sell of the share, pay back the borrowed loan and have a quick profit. Speculators also purchased shares 'on margin' which meant that they did not have to pay the full cash price of the share. American banks spent over 9 billion dollars in speculation. This form of trading worked very well only as long as the share prices were going up. ...read more.

This recessive fall in demand was not a recent development. Through the months of September and October the share market experienced heavy falls. On 19th October over 3 million shares were traded, the industrial average fell by 12 points and margin calls were sent out. Money was demanded from investors because the stock margin had fallen down in value and could not be used as a guarantee on the repayment of loans. A sense of nervousness and gloom flooded the market. There was a high volume of trade, the ticker tape fell behind in printing the prices, investors became unaware of their share values and the industrial average fell heavily. Investors did not want to be stuck up with prices lower than what they had borrowed the shares and quickly tried to sell their shares. On Thursday 24th and Tuesday 29th October, investors sold more than 13 million shares and 16 million shares at fraction of the price they had bought them for. Banks sold their shares to cover losses made by bankrupt speculators. Rumors spread than the senior banking officials would not stabilize the share market and in fact were selling their own shares. To ordinary investors this was like the crew of a broken ship was elbowing their own passengers to get into the rescue boats. A vital element destroyed was confidence. ...read more.