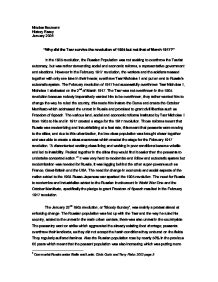 &quot;Why did the Tsar survive the revolution of 1905 but not that of March 1917?&quot; In the 1905 revolution, the Russian Population was not seeking to overthrow

Nicolas Baumann History Essay January 2006 "Why did the Tsar survive the revolution of 1905 but not that of March 1917?" In the 1905 revolution, the Russian Population was not seeking to overthrow the Tsarist autocracy, but was rather demanding social and economic reforms, a representative government and elections. However in the February 1917 revolution, the workers and the soldiers massed together with only one idea in their heads; overthrow Tsar Nicholas II and put an end to Russia's autocratic system. The February revolution of 1917 had successfully overthrown Tsar Nicholas II, Nicholas II abdicated on the 2nd of March 1917. The Tsar was not overthrown in the 1905 revolution because nobody imperatively wanted him to be overthrown, they rather wanted him to change the way he ruled the country, this made him instore the Duma and create the October Manifesto which addressed the unrest in Russia and promised to grant civil liberties such as Freedom of Speech. The various land, social and economic reforms instituted by Tsar Nicholas II from 1905 to his end in 1917 created a stage for the 1917 revolution. Those reforms meant that Russia was modernizing and industrializing at a fast rate, this meant that peasants were moving to the cities, and due to this urbanization, the low-class population was brought closer together and was able to create a class-awareness which created the stage for the February 1917 revolution. ...read more.

The Tsar decided to give in. Count Sergei Witte encouraged the Tsar to create the October Manifesto; the manifesto was issued on the 30th of October 1905. The October manifesto basically pledged to grant civil liberties and promised the Duma where people could be elected and represent their groups and interests, much like a parliament. The Tsar also promised to put an end to press censorship and gave people the right to form political parties. This was the start of the Downfall of the Tsar, now that he created the Duma, it gave his opponents a chance to meet and share their views about the Tsar and communicate between each other much better, one of the reasons why he wasn't overthrown in 1905 was due to the fact that his different opponents were not organized and could not cooperate properly, for example, in1905 the railway workers did not go on strike which meant that troops could be brought in to control the situation. With the Duma, although the Tsar did not grant it much power, his opponents now had a place to meet and exchange views and opinions. Also the end of press censorship meant that newspapers could now release anything they wanted, when this was added to formation of political parties and to the fact that people were now able to say what they wanted to say, resulted in the Tsar and his autocracy being greatly harmed by the manifesto and opposition grew stronger and more organized. ...read more.

crowds below."4 On the 2nd of March 1917, Tsar Nicholas II "abdicated for himself and his sick son in favour of his brothers Michael; but Michael, realizing the extent of the antimonarchical feeling, refused and the Romanov dynasty came to a swift end. The Duma committee set about forming a new Government." This was the definite end of the Russian Autocracy and of the Tsar. In the 1905 revolution, the urban population was still "young", there was no class-awareness and there were no organized groups and committees. The 1905 revolution could be seen as a rehearsal for the February 1917 revolution. After being pressured in 1905, the Tsar was making mistakes upon mistakes, one of which was his decision to lead the army in World War One and to put his wife, Alexandra, in charge of the autocracy, this tarnished the image of the Tsar and created an even bigger feel that the government was incompetent. Russia, however, had made some progress in modernization and in agriculture and industrialization; but these 3 factors did not rhyme with autocracy, at least not with the Tsar's autocracy. It brought low-class people closer together from the countryside and created this "class-awareness". The Tsar did not want to make sacrifices for a large gain so he could safely stay in power; instead he continued to impose his crude autocratic regime on the people of Russia which resulted in the end of him and of the Romanov dynasty. ...read more.