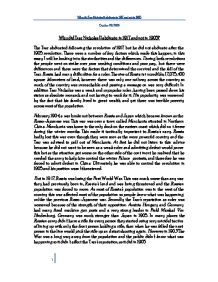 Why did Tzar Nicholas II abdicate in 1917 and not in 1905? The Tzar abdicated following the revolution of 1917 but he did not abdicate after the 1905 revolution. There were a number of key factors which made this happen, in this essay I will be looking into the similarities and the differences. During both revolutions the people went on strike over poor working conditions and poor pay, but there were differences and these were the factors that determined the survival and the fall of the Tzar. Russia had many difficulties for a ruler. The size of Russia is incredible, 17,075,400 square kilometers of land, however there was only one railway across the country so much of the country was unreachable and passing a message on was very difficult. In addition Tsar Nicholas was a weak and unpopular ruler, having been passed down his status as absolute monarch and not having to work for it. His popularity was worsened by the fact that his family lived in great wealth and yet there was terrible poverty across most of the population. February 1904, a war broke out between Russia and Japan which became known as the Russo-Japanese war. This war was over a town called Manchuria situated in Northern China. ...read more.

Petersburg and gone to live near the front line, leaving his German wife Keisarinna Aleksandra in charge of Russia. This was a very bad move. Aleksandra was hated as she was seen as a German spy. Under her leadership there was a mass shortage of food as all the supplies were going to the front line to feed the soldiers. Further weakening The Tzar's Reputation compared to 1905. Russian factory workers worked extremely long hours including Saturdays and conditions in the factories were extremely harsh. There was little concern shown for the workers and their health. Workers tried to form trade unions, but they were dismissed by the factory owners who had total power over their employees. Then in 1903, a Priest formed the Assembly of Russian Workers and within a year it had over 9,000 members. In 1904 prices of essential goods rose immensely, and therefore effectively wages fell by 20 per cent. The Priest wasn't happy that nothing was improving and so called for industrial action. Over the next few days over 110,000 workers in St. Petersburg went out on strike, in an attempt to settle the dispute, the priest decided to make a personal appeal to Tzar Nicholas II. The Tzar accepted this appeal and he shortened the working day by a couple of hours and also agreed to an increase in wages and an improvement in working conditions. ...read more.

This was made worse by Russia's involvement in the First World War. These two situations were basically the same because in both Russia were losing a war and there were riots because of poverty. However in 1917 the war was on their land so if they had pulled out like in Manchuria they would have lost their land and their people would have to abandon their homes as most of the Russians lived in west Russia. Also in this war the Tzar's weakness was very obvious as Germany were much stronger than Japan. Germany was ready for a war whereas Russia didn't have anywhere near enough supplies, rifles or ammunition. Also the protests had stepped up a level, the workers and peasants realized that the peaceful protest weren't going to work so they stated violent protests and these were a lot more affective. In conclusion I think it was the three differences Being that he had he a worsened reputation, the situation in the war was far worse and the main point is that The Protests had got more organized and they were now violent not peaceful. This is what made the Tzar abdicate from his position of absolute ruler on 15th March 1917 when in 1905 the situation had not escalated as much enabling the Tzar to continue. ?? ?? ?? ?? Why did Tzar Nicholas II abdicate in 1917 and not in 1905 October 29, 2008 1 ...read more.