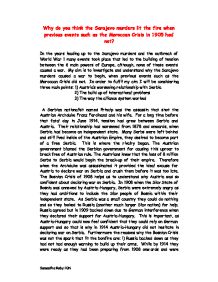 Why do you think the Sarajevo murders lit the fire when previous events such as the Moroccan Crisis in 1905 had not?

Why do you think the Sarajevo murders lit the fire when previous events such as the Moroccan Crisis in 1905 had not? In the years leading up to the Sarajevo murders and the outbreak of World War 1 many events took place that led to the building of tension between the 6 main powers of Europe, although, none of these events caused a war. My aim is to investigate and understand why the Sarajevo murders caused a war to begin, when previous events such as the Moroccan Crisis did not. In order to fulfil my aim I will be considering three main points: 1) Austria's worsening relationship with Serbia 2) The build up of international problems 3) The way the alliance system worked A Serbian nationalist named Princip was the assassin that shot the Austrian Archduke Franz Ferdinand and his wife. For a long time before that fatal day in June 1914, tension had grew between Serbia and Austria. ...read more.

While by 1914 they were ready as they had been preparing from 1908 onwards and were determined not to back down again. ii) Austria-Hungary did not feel confident they could rely on German support until after the Bosnia Crisis. During the years leading up to the war tensions grew between the major powers of Europe. International problems developed that lead to the most important crises in explaining why the war happened when it did. The Moroccan Crisis of 1905 was between France and Germany. France desired to occupy Morocco as a colony and were on the verge of achieving their ambition, when Kaiser Wilhelm ll made a speech in which he said he would support the Moroccans in their struggle against the French. It was intended to undermine the growing Anglo-French friendship as Germany thought that Britain would not come to Frances aid. However an international conference was called and Germany was humiliated. ...read more.

incompetence To conclude this essay, it is my opinion that at none of the other events before the Sarajevo murders could a war have been engineered. Before this time countries were not prepared for a war to take place and did not know they could rely on other countries support. I think that the alliances were an extremely important factor in causing the war, as if countries were not so confident they could rely on others support, they would not participate in a war in fear of defeat. The Sarajevo murders were the icing on the cake, tensions had built in the years leading up to them and countries such as Germany (who had suffered defeats in the past) were determined not to be the loser this time. The murders were merely an excuse to show that their country was superior to the others and that they should be given what they want. In my opinion most countries acted like spoilt children, none willing to form a compromise without resentment. Samantha Raby 10N ...read more.