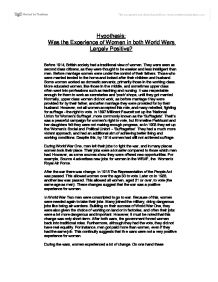 Hypothesis: Was the Experience of Women in both World Wars Largely Positive? Before 1914, British society had a traditional view of women. They were seen as second class citizens, as they were thought to be weaker and less intelligent than men. Before marriage women were under the control of their fathers. Those who were married tended to the home and looked after their children and husband. Some women worked as domestic servants, primarily those in the working class. More educated women, like those in the middle, and sometimes upper class often went into professions such as teaching and nursing. It was respectable enough for them to work as secretaries and 'posh' shops, until they got married. Normally, upper class women did not work, as before marriage they were provided for by their father, and after marriage they were provided for by their husband. However, not all women accepted this role, and many rebelled, fighting for suffrage - the right to vote. In 1897 Millicent Fawcett set up the 'National Union for Women's Suffrage', more commonly known as the 'Suffragists'. Their's was a peaceful campaign for women's right to vote, but Emmeline Parkhurst and her daughters felt they were not making enough progress, so in 1903 they set up the 'Women's Social and Political Union' - 'Suffragettes'. They had a much more violent approach, and had an additional aim of achieving better living and working conditions. Despite this, by 1914 women had still not achieved suffrage. During World War One, men left their jobs to fight the war, and in many places women took their place. ...read more.

Women were now seen in a more positive way. Moreover, Nancy Aster (of Sutton, Plymouth) became the first female MP. Also in this year, Oxford University allowed women to study for degrees. Furthermore, women were allowed to vote. This showed that even the government began to accept that women should have political equality. Finally, both wars gave women greater independence. During and after World War One, women did gain more freedom. This was due to the fact that they had jobs. They earned their own money, therefore did not need to depend on their father or husband. Because of this they had more freedom, clearly supported by Source 8, a photograph of a group of women at a restaurant. It seems as if they are without a chaperone, which would not have been normal before the war. Also, we see them smoking, despite the 'LADIES Please Do Not Smoke' sign. This shows them rebelling. They were doing what they wanted to, not what they were expected to do. However this was not the norm for the working class women. They were not as wealthy as the other classes, so could not afford this kind of lifestyle. Women did gain more freedom. They were given the right to vote, and the Sex Discrimination Act opened up more careers to them. Although some experiences of women were positive, they also had many negative experiences. One was that they still had to take on roles expected of them, and had to leave behind the roles which they adopted in the Wars. ...read more.

Getting the vote clearly did not alter the position of women in Great Britain. During World War One and World War Two women of all classes experienced a lot of change and continuity. Some of these experiences were positive, and some were negative. Women wanted to work, and the government sometimes encouraged them to as well. This gave them a greater level of independence. Also, the government recognised the help and effort women had put into the war, and therefore allowed them to work in more qualified professions. By 1928 they were even given the right to vote if they were over the age of 21. Despite all of this, the main role of women did not change much. This was significant during the interwar period. They were still expected to tend to the home, whether they had a job or not. Men were still seen as being more important. This is proven as they took the women's jobs after they returned from war. Even the government limited them from working. They were only asked to work during the beginning of World War Two when they were urgently needed. After this, they were forced back into their homes. Although some women carried on working, they were not treated the same as men. This was apparent as the president rejected the Equal Pay Act in 1944. Today, women do usually have equal pay, but they are often still victims of discrimination. In conclusion, there were positive aspects in both of the World Wars for women. However, they still had negative experiences, so the experience was not wholly positive. ?? ?? ?? ?? ...read more.