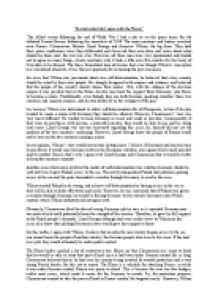 ﻿To what extent do I agree with the Thesis? The Allied victors following the end of World War I had a job to set the peace terms for the defeated Central Powers following the armistices of 1918. The main countries and leaders involved were France- Clemenceau, Britain- Lloyd George and America- Wilson: the big three. They held Paris peace conferences were they deliberated and discussed their own ideas and views about what should be done; now the war was over. However, all three men were very opinionated and tended not to agree on many things, which concludes why it took a little over five months for the treaty of Versailles to be formed. The thesis formulated here advocates that even though Wilson?s conception was considered idealistic, it was the best approach for sustaining the post-war peace. An issue that Wilson was passionate about was self-determination; he believed that every country should be ruled by their own people. He strongly disagreed with empires and colonies, and believed that the people of the country should choose their leader. But, with the collapse of the Austrian empire it was possible that in the future Austria may look for support from Germany- join forces to become a union. ...read more.

So, after seeing so many young men not return from the trenches on the western front, Clemenceau and his people wanted revenge against the German through the peace settlement. He wanted to ensure that his country and its people would never be destroyed by German aggression again. Therefore, he demanded very high reparations- 200 billion gold francs- so Germany would never have the means to harm France again. Since, unlike in America and Britain, the German troops had managed to do a lot of damage to the French industry for example flooding coal mines, and destroying farm machinery. But, most importantly the war had obliterated the French economy, their economic state was very poor at the time and Clemenceau wanted to use the money he received in reparations, to get France back on its feet. However, Lloyd George was only following popular sentiment back in Britain when he fought for harsher terms than Wilson. He, himself was much more reserved on this issue and like Wilson did not want too much from Germany. He did not want the German industry to cripple, because he ultimately believed a weak Germany would damage the British economy as Germany was considered a very useful trading partner. ...read more.

the situation, if Germany wasn?t weakened dramatically in the first place, I highly there would be a purpose or reason for Germany to invade again. However, I do believe that the military should have been reduced- especially the army- as they had more than 2 million, which was more than any country, needs to defend themselves. Overall, I believe that Wilson and Clemenceau were both extreme. Their views were very much either side of the scale whereas Lloyd George seemed to be sometimes in agreement with Wilson and other times with Clemenceau. So, in effect Wilson?s views were idealistic and I believe that Lloyd George had the common ground and was right for most of the issues. However, if the treaty of Versailles contained the proposals that Wilson wanted, I do believe that there may not have been a second world war. This is because the German people would have not felt suppressed and would not support the rise of a leader like Hitler. So, even though I think that Lloyd George had the best approach considering the circumstances, the German people would still be repressed immensely if his terms were agreed to. Therefore, in hindsight I do agree with the thesis that Wilson did have the best approach for the sake of long lasting peace. ...read more.