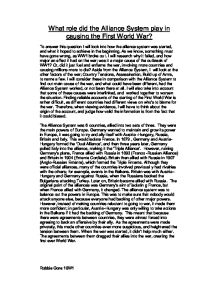 World War 1 - The role of the Alliance System

What role did the Alliance System play in causing the First World War? To answer this question I will look into how the alliance system was started, and what it hoped to achieve in the beginning. As we know, something must have gone wrong, as WW1 broke out. I will research why it failed, and how major an effect it had on the war; was it a major cause of the outbreak of WW1? Or, did it just fuel and enflame the war, involving more countries and causing millions more to die? Aside from the Alliance System, I will look at the other factors of the war; Country Tensions, Assassination, Build up of Arms, to name a few. I will consider these in comparison with the Alliance System to find out main cause of the war, and what could have been different, had the Alliance System worked, or not been there at all. I will also take into account that some of these causes were interlinked, and worked together to worsen the situation. Finding reliable accounts of the starting of the First World War is rather difficult, as different countries had different views on who's to blame for the war. Therefore, when viewing evidence, I will have to think about the origin of the account, and judge how valid the information is from the fact that it could biased. ...read more.

Great Britain Britain had remained quite out of the complications before the war, only intervening where it saw fit and necessary. It had only made loose treaties with France and Russia, and hadn't promised any military support at all. Britain was worried about Germany's build up of arms and its seemingly rabid want for war with France. Also it felt threatened by Germany's want of a bigger navy and empire. Some historians believe that if Britain had stated its intent before the war, that Germany may have persuaded Austria-Hungary to stand down, not wanting to go to war with Britain. Italy Italy's place in allegiance with Germany and Austria-Hungary was always dubious. In the treaty, the terms gave Italy a few loopholes to use. Here are the terms that were agreed: 1) If Italy or Germany was attacked by France, each would aid the other; 2) If Austria was attacked by Russia, Italy would remain neutral, although Austria would aid Italy if she was attacked by France; 3) If one of the parties was attacked by two or more powers, the other signatories were to come to her aid; and 4) At Italy's request, both Austria and Germany agreed that in no case would the Treaty operate against Britain. ...read more.

America joined in the late stages of the war, after the Germans sunk a liner with many Americans on it. In essence, the assassination was the spark to light the fire of The First World War. Looking over my project and research about the Alliance System and other causes of WW1, it is surprising how much more complicated it was than people give it credit for. The idea of a war with clear causes and teams is in this case, a deluded one. The build up of the different tensions between countries, the secret alliances, and suspicion, was all interconnected, and mainly came down to one ruling factor; Imperialism. If you look through the suggested causes, long and short term, of WW1, many of them are in some way linked to the expansion of empires. The problem in Europe was that all of those countries wanting Empires were next to each other. I think the Alliance system wasn't a major cause of WW1, but it certainly escalated it beyond the few countries involved in the war to start with. Maybe, if there was never an alliance system, the war would have been contained to Austria-Hungary and Russia. Or, maybe there wouldn't have been a war at all, if Germany hasn't backed Austria-Hungary. The Alliance System certainly didn't achieve what it had hoped to; in fact it did quite the opposite. ?? ?? ?? ?? Robbie Gore 10W1 ...read more.