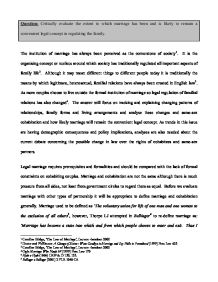 Critically evaluate the extent to which marriage has been and is likely to remain a convenient legal concept in regulating the family.

Question: Critically evaluate the extent to which marriage has been and is likely to remain a convenient legal concept in regulating the family. The institution of marriage has always been perceived as the cornerstone of society1. It is the organising concept or nucleus around which society has traditionally regulated all important aspects of family life2. Although it may mean different things to different people today it is traditionally the means by which legitimate, heterosexual, familial relations have always been created in English law3. As more couples choose to live outside the formal institution of marriage so legal regulation of familial relations has also changed4. The answer will focus on tracking and explaining changing patterns of relationships, family forms and living arrangements and analyse these changes and same-sex cohabitation and how likely marriage will remain the convenient legal concept. As trends in this issue are having demographic consequences and policy implications, analyses are also needed about the current debate concerning the possible change in law over the rights of cohabitees and same-sex partners. Legal marriage requires prerequisites and formalities and should be compared with the lack of formal constraints on cohabiting couples. Marriage and cohabitation are not the same although there is much pressure from all sides, not least from government circles to regard them as equal. Before we evaluate marriage with other types of partnership it will be appropriate to define marriage and cohabitation generally. Marriage used to be defined as 'The voluntary union for life of one man and one woman to the exclusion of all others5, however, Thorpe LJ attempted in Bellinger6 to re-define marriage as: 'Marriage has become a state into which and from which people choose to enter and exit. Thus I would now redefine marriage as a contract for which the parties elect but which is regulated by the state, both in its formation and in its termination by divorce, because it affects status upon which depend a variety of entitlements, benefits and obligations'. ...read more.

Marriage creates a set of assumptions about legitimate parenthood. A married father is able to have automatic parental responsibility over his child. This is denied the unmarried father. However, his position is now much clearer as a result of the Children Act 1989. However, the unmarried father has no automatic parental responsibility, this vest exclusively in the mother18. The father must acquire parental responsibility either by agreement with the mother or by a parental responsibility order or by obtaining a residence order19. At present, an adoption order can only be made in favour of two persons if they are a married couple20 --- the same applies in respect of parental orders following a surrogacy arrangement. Considering different types of partnerships, it is now to be discussed whether marriage is likely to remain the convenient legal concept to regulate family. There is no doubt that as the alternatives to marriage are strengthened, so the institution of marriage is progressively weakened. This undermines the only institution ever shown to be capable of raising children successfully. Patricia Morgan in her book Marriage-Lite, The Rise of Cohabitation and its Consequences argued that marriage has been demoted in society as a whole. It has lost the support of government, and is neglected and discredited in the media. Politicians and social policy intellectuals frequently avoid using the term 'marriage', claiming that cohabitation and marriage are essentially the same. The Lord Chancellor's Department stated its belief in a recent paper when canvassing proposals to give unmarried fathers the same parental rights as married fathers. It said that "the growing acceptance of long-term cohabitation as a preliminary or alternative to marriage" means that "many such relationships must be at least as stable as marriage". Likewise, Jack Straw when he was Home Secretary said, "we shouldn't get in a paddy about the decline of formal marriage ... other kinds of families, including single-parent families, parents who live together without choosing to marry, and step-families, can do just as well for their children" on the grounds that "the most important thing is the quality of the relationship, not the institution in itself". ...read more.

In Britain, people want gay marriage because it represents equality, but are more concerned in practice with civil partnership registration. This represents values of equality and mutual responsibility and commitment which, as with marriage, express what people desire from their long term relationships. With recent changes, local authorities will be able to set up civil registers and many people are expected to apply. The Civil Partnership Bill covers all adult relationships but does not tackle rights for children. However, the Adoption Bill will allow unmarried couples who are in an enduring family relationship to adopt jointly. There is some ideological opposition to civil partnership, for example, concerns about the undermining of marriage, commitment and stability in relationships. However, there is a great deal of support. Another objection, is the economic consequences, especially the cost of altering work and pensions systems. To conclude, I partially agree with the statement posed by the question. However, one of the themes that have been observed during the discussion is that the legal effects of marriage and cohabitation have merged. It has also been pointed out that an imposition of based on cohabitation, is more fraught with difficulty in terms of practical operation. The collapse of marriage means growing family instability, declining investment in children and in the end to more men and women living alone27. It also undermines society. Marriage may regulate a declining number of relationships, but its ready identifiability, and popular recognition and respect, may still justify its primacy and its protection28. However, in my opinion, marriage today has sadly lost the support because of government and is neglected and discredited in the media. There is vast ignorance about the meaning, implication and far-reaching effects of cohabitation (both heterosexual & homosexual), for those involved and for the whole of society. I think marriage will be regarded as the convenient legal concept in regulating the family and should be revitalised but this requires considerable re-education of society, and the elimination of the anti-marriage bias currently prevalent in society. ...read more.