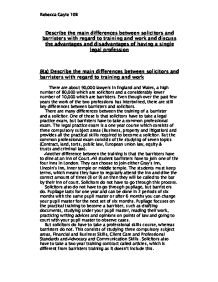 Describe the main differences between solicitors and barristers with regard to training and work and discuss the advantages and disadvantages of having a single legal profession 8(a) Describe the main differences between solicitors and barristers with regard to training and work There are about 90,000 lawyers in England and Wales, a high number of 80,000 which are solicitors and a considerably lower number of 10,000 which are barristers. Even though over the past few years the work of the two professions has intertwined, there are still key differences between barristers and solicitors. There are many differences between the training of a barrister and a solicitor. One of these is that solicitors have to take a legal practice exam, but barristers have to take a common professional exam. The legal practice exam is a one year course which consists of three compulsory subject areas (Business, property and litigation) and provides all the practical skills required to become a solicitor. But the common professional exam consists of the studying of seven topics (Contract, land, torts, public law, European union law, equity & trusts and criminal law). Another difference between the training is that the barristers have to dine at an Inn of Court. All student barristers have to join one of the four inns in London. They can choose to join either Gray's Inn, Lincoln's Inn, Inner temple or middle temple. The students must keep terms, which means they have to regularly attend the inn and dine the correct amount of times (8 or 9) ...read more.

It was held that barristers could be sued for professional negligence outside of court, and Saif's barrister had owed him a duty of care while advising Saif so he could be sued for negligence as he had breached his duty of care owed to his client. Barristers could be sued up to �2000 or, depending on the seriousness of the case, could be barred from practising as a barrister. A barrister does dot enter a contract with his client, therefore he cannot sue for unpaid fees, which also means the client cannot sue the barrister for breach of contract. But in the more recent case of Hall v. Simons (2000) the client can now sue his/her barrister for professional negligence. This case held that the given immunity to barristers from the case of Rondel v. Worsley had not been decided wrongly at the time, but the world had changed. The House of Lords decided that the immunity from the previous case could not be justified; therefore the immunity from being sued negligence had been removed from both criminal and civil cases. Both barristers and solicitors can now be sued for negligence regarding work out of court and work during the course of a trial. This was a precedent which is now used for current cases. In conclusion there are many differences between barristers and solicitors which make the two professions different. Some of the main differences are barristers have to dine at an Inn of their choice whereas solicitors don't, most solicitors meet face to face with the client whereas barristers just advocate them in court and barristers are self employed whereas solicitors are usually employed by an employer. ...read more.

Another disadvantage of fusing the two professions is the loss of the cab-rank rule. The cab-rank rule is a rule which all barristers have to follow which is they must accept the next brief given to them, on the condition that they have not already been briefed for that day. This ensures that representation is fair, even in the most distasteful or unpopular cases. But if the two professions were fused, the cab-rank rule would be harder to operate, so some cases may not be ensured proper representation. Another disadvantage of fusing the two professions is that they normally split of into two branches anyway. Currently we have solicitors and barristers, solicitors being the office workers and barristers being the advocates. But even if the two professions were fused, the lawyers would usually split into office workers and advocates, which is almost the same as solicitors and barristers, destroying one of the main purposes of fusion. To conclude I feel that although fusion may seem like a good thing, the two professions should stay separated. Fusion may be ok for a little while, but overall it would just create unsolvable issues which we would not be able to handle. Although fusion reduces the duplication of work, encourages continuity and it may be a little cheaper, fusion could decrease the amount of specialists available and destroy the cab-rank rule which would mean that clients may not receive the proper representation to which they are entitled to. Proper representation of a case is high in public concern, an although cheap law may be a good thing, bad law is not, therefore putting fusion into place in the English legal system would not be the best move to make. ...read more.