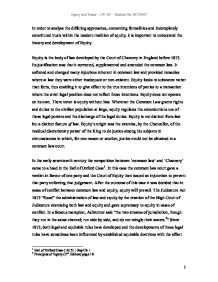 In order to analyse the differing approaches, concerning formalities and incompletely constituted trusts within the modern tradition of equity, it is important to understand the history and development of Equity.

In order to analyse the differing approaches, concerning formalities and incompletely constituted trusts within the modern tradition of equity, it is important to understand the history and development of Equity. Equity is the body of law developed by the Court of Chancery in England before 1873. Its justification was that it corrected, supplemented and amended the common law. It softened and changed many injustices inherent in common law and provided remedies where at law they were either inadequate or non-existent. Equity looks to substance rather than form, thus enabling it to give effect to the true intentions of parties to a transaction where the strict legal position does not reflect those intentions. Equity does not operate on its own. There never is equity without law. Wherever the Common Law grants rights and duties to the civilian population at large, equity regulates the conscientious use of those legal powers and the discharge of the legal duties. Equity is not distinct from law but a distinct feature of law. Equity's origin was the exercise, by the Chancellor, of the residual discretionary power of the King to do justice among his subjects in circumstances in which, for one reason or another, justice could not be obtained in a common law court. In the early seventeenth century the competition between 'common law' and 'Chancery' came to a head in the Earl of Oxford Case1. In this case the common law court gave a verdict in favour of one party and the Court of Equity then issued an injunction to prevent that party enforcing that judgement. After the outcome of this case it was decided that in cases of conflict between common law and equity, equity will prevail. The Judicature Act 1873 "fused" the administration of law and equity by the creation of the High Court of Judicature exercising both law and equity and gave supremacy to equity in cases of conflict. ...read more.

The subject of the trust must also be certain. If, for example, the trust involved the transfer of shares, that amount of shares must be certain. Uncertain objects may indicate uncertain intention as was the case in Lambe v Eames9. This case involved a gift by a testator to his widow of his entire estate "to be at her disposal in any way she may think best for the benefit of herself and her family." The wording makes it unclear as to whether he intended a gift to his wife or a trust where his wife would be a trustee and her family would be the beneficiaries. It was held to be ineffective to create a trust and the widow took the estate absolutely. Finally, Lord Langdale said that the third requirement is certainty of object. The beneficiary or beneficiaries under the trust must be a calculable amount. Declaring that "all employees and their families" are beneficiaries would be too vague for the court to declare it to be a valid fixed trust. Lord Evershed stated in Re Endacott10, that "in order [for a fixed trust] to be effective, [it] must have ascertained or ascertainable beneficiaries." These three certainties must be satisfied for the protection of the trustees. If the trustees do not know the terms of the trust they might breach the trust and be personally liable for any loss. In the case of Morice v Bishop of Durham11, Sir William Grant said that "there can be no trust over the exercise of which this court will have no control, for an uncontrollable power of disposition would be ownership and not a trust." In order for a trust to be controlled by the courts, its object and subject must be certain. A trust is said to be completely constituted when "the trust property is vested in trustees for the benefit of beneficiaries; until that has been done the trust is incompletely constituted" There are three ways to benefit an intended donee. ...read more.

The courts now increasingly recognise that unconscionability is the foundation of many of the principles of equity. The case of Pennington will prove indispensable for those seeking to uphold gifts which are not formally complete. An appeal to unconscionability or benevolent principles of construction may enable a successful argument that the gift is valid even though the donee has not in his possession the documents necessary to obtain legal title. To conclude, the case of Strong v Bird required that the donor to have the relevant intention and that their intention stayed fresh until the donor's death. Milroy, required that the settlor do everything which is required to transfer property of that type. Re Rose required the donee only to do whatever was within his powers, Pagarani allowed the "words used" to create a gift on trust and finally Pennington was decided because the judge felt that it would be unconscionable for the donor to change their mind. From all these changes in the past one thing has become clear: As noble as the 'ideology' of equity is, it largely depends on the judge and how he feels on that certain day. There is a lot of debate about which decisions are good law and which are bad law but at the end of the day it's up to the judges. Donors' intentions die with them. It is impossible for anyone to be precise about the intentions of a dead person. Even if the donor put his or her wishes and intentions in a will, if that will is read by one hundred people, there will be many variations of the donors' intentions. Equity, just like its Common Law brother, should be decided on case law and not maxims and dead peoples conscious. Approaches within modern equity to disputes concerning formalities and incompletely constituted trust have changed and will continue to change. Equity, compared to the common law, is very young and the outcome of cases, unlike the common law, is difficult to predict because it depends on how the court perceives the justice of the individual case. ...read more.