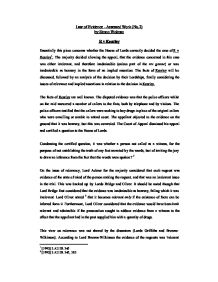 Law of Evidence - Assessed Work (No.2) by Simon Wolman R v Kearley Essentially this piece concerns whether the House of Lords correctly decided the case of R v Kearley1. The majority decided allowing the appeal, that the evidence concerned in this case was either irrelevant, and therefore inadmissible (unless part of the res gestae) or was inadmissible as hearsay in the form of an implied assertion. The facts of Kearley will be discussed, followed by an analysis of the decision by their Lordships, finally considering the issues of relevance and implied assertions in relation to the decision in Kearley. The facts of Kearley are well known. The disputed evidence was that the police officers whilst on the raid answered a number of callers to the flats, both by telephone and by visitors. The police officers testified that the callers were seeking to buy drugs in place of the original callers who were unwilling or unable to attend court. The appellant objected to the evidence on the ground that it was hearsay, but this was overruled. The Court of Appeal dismissed his appeal and certified a question to the House of Lords. Condensing the certified question, it was whether a person not called as a witness, for the purpose of not establishing the truth of any fact narrated by the words, but of inviting the jury to draw an inference from the fact that the words were spoken ? 2 On the issue of relevancy, Lord Ackner for the majority considered that each request was evidence of the state of mind of the person making the request, and that was an irrelevant issue in the trial. ...read more.

This point follows Spencer's comment regarding what we mean by 'prove'. He suggests that 'prove' is equivalent to 'suggesting it'21. It is submitted, that in essence this is what 'prove' means. Ultimately, it is the jury who are to decide what evidence they consider suggests guilt opposed to innocence. Finally it is submitted that opinion expressed by Lord Browne-Wilkinson, regarding human activity necessarily implying that the human being has reasons and beliefs on which his actions are based, has some merit. It would seem unlikely that a potential customer of drugs would act and go somewhere to obtain a substance without prior knowledge that he would be able to obtain it. It is clear, that the disputed evidence in Kearley was relevant, and was correctly admitted by the trial judge. It indicated potential customers or a market, which is probative evidence that the defendant was a drug dealer. It is submitted, that there could be no clearer evidence than this to establish that a person was in possession of a controlled substance with intent to supply. Kearley concerned implied assertions. According to Keane an implied assertion is : " An assertion where made orally, in writing or by conduct from which it is possible to infer a particular fact."22 It could be argued that Kearley contained an implied assertion conforming to this definition. The inference in this case being that the appellant was a drug dealer and was therefore guilty of possession with intent to supply. Previous authorities23 support the view that implied assertions fall foul of the hearsay rule and should be inadmissible. ...read more.

This essay is excellent. It considers each judgment - minority and majority views - in Kearley, and academic commentary in some depth.

It would achieve high marks at even undergraduate level.