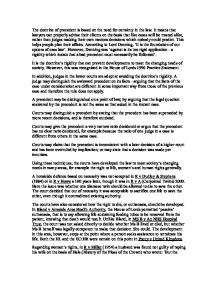 The doctrine of precedent is based on the need for certainty in the law. It means that lawyers can properly advise their clients on the basis that like cases will be treated alike, rather than judges making their own random decisions which nobody could predict. This helps people plan their affairs. According to Lord Denning, 'It is the foundation of our system of case law'. However, Denning was 'against is its too rigid application - a rigidity which insists that a bad precedent must necessarily be followed'. It is the doctrine's rigidity that can prevent developments to meet the changing needs of society. However, this was recognised in the House of Lords 1996 Practice Statement. In addition, judges in the lower courts are adept at avoiding the doctrine's rigidity. A judge may distinguish the awkward precedent on its facts - arguing that the facts of the case under consideration are different in some important way from those of the previous case and therefore the rule does not apply. ...read more.

Using these techniques, the courts have developed the law to meet society's changing needs in many areas, for example the right to life, women's and human rights generally. A homicide defence based on necessity was not accepted in R v Dudley & Stephens (1884) or in R v Howe a 100 years later, though it was in R v A (Conjoined Twins) 2000. Here the issue was whether one Siamese twin should be allowed to die to save the other. The court decided that out of necessity it was acceptable to sacrifice one life to save the other, even though it contradicted existing authority. The courts have also considered how the right to die, or euthanasia, should be developed. In Bland v Airedale Area Health Authority, the House of Lords permitted 'passive' euthanasia, that is to say allowing life sustaining feeding tubes to be removed from the patient, knowing that death would result. ...read more.

Forty years later, this defence was no longer acceptable and the rule was changed in R v R. The impact of the Human Rights Act 1998 is as yet uncertain. But there is no doubt that case law will be developed according to society's changing needs, for example that our privacy should be respected. Before the Act, the courts followed Kaye v Robinson in denying the right to privacy. However, in the ground-breaking case of Douglas v Hello Ltd. Here, Sedley LJ said that there is 'a right of privacy which English law will today recognise and, where appropriate, protect'. That said, there is, as yet, no tort of privacy. Lastly, there are a number of 'morality cases' where the changing mores of society are recognised. For example, in Gillick v West Norfolk AHA, the issue was whether it was morally acceptable to prescribe contraceptives to under 16 year olds without parental consent. It was and this reflects how we live today ...read more.

Good essay addressing the key cases. The student should consider more contemporary themes in order to bring this essay up to date.