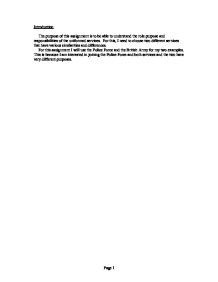 The purpose of this assignment is to be able to understand the role purpose and responsibilities of the uniformed services. For this, I need to choose two different services that have various similarities and differences.

Introduction The purpose of this assignment is to be able to understand the role purpose and responsibilities of the uniformed services. For this, I need to choose two different services that have various similarities and differences. For this assignment I will use the Police Force and the British Army for my two examples. This is because I am interested in joining the Police Force and both services and the two have very different purposes. Task A � Research two uniformed services of your choice, and describe why those services exist, and what they do including an example of recent work. The police service exists as forty-three separate forces, each run and maintained by the government. The government supplies the forces with a budget, which varies in amount, depending on the circumstances in which it is needed for, e.g. size of patrolled area, level of crime, etc. Each force has its own Chief Constable. The Chief Constable is the highest ranking officer within each force and works alongside the Police Authority and Home Office. The Home Office is a department of the British Government, which manage the emergency services and insure the safety of England and Wales. The Home Secretary is the MP in charge of the Home Office. The Police Authority is a localised organisation that deals specifically with Police Force. It is made up of counsellors and magistrates who contribute to the local forces and ensure the public have say in the running of their force. The main purpose of the police service is outlined in the Police Service's Statement of Common Practice and Values and is as follows: 1 The purpose of the police service is to uphold the law fairly and firmly 2 To prevent crime 3 To pursue and bring to justice those who break the law 4 To keep the Queen's Peace 5 To protect, help and reassure the community 6 To be seen doing all this with integrity, common sense and sound judgement 7 We must be ...read more.

Recent work of the Police Service can be seen everywhere. Achievements vary from safer communities, sentenced criminals, the conviction of major regional drugs/illegal product suppliers (e.g. imported tobacco), to major incidents such as bomb threats or disasters such as the Selby Rail Disaster in 2001. The Army, as well as other armed forces, is under the control of the Ministry of Defence (MoD). This Government department mission is to ensure the safety of the United Kingdom and its interests. There are British Army barracks and headquarters across the world. It is responsible for land warfare, including infantry and artillery, and works with other armed forces, such as the Royal Navy and the Royal Air Force, in defending Great Britain, its colonies (e.g. the Falkland Isles) and its allies (e.g. USA). The Army has many groups including combat, engineering, information technology/communications (IT/Comms.) and logistics. These are yet again categorised into sub-groups. The combat group includes infantry, artillery, air corps and cavalry. The average infantry soldier is usually always in the thick of the action and the first to arrive on a battle scene. The infantry are all trained as fighting soldiers but may have other skills useful on the battlefield, e.g. medic, chef, driver, electrician and more. These soldiers need to be psychically fit and well conditioned. The artillery section of this group uses large, vehicle-towed guns. These guns fire a range of ammunition from bullets to mortars to missiles and are a vital part of clearing large areas of enemy troops. The Air Corps use helicopters and small aircraft for a range of activities including: searching, delivering and attacking. Cavalry includes tracked and wheeled vehicles including tanks, recovery vehicles, bridgelayers, armoured people carriers (APC), jeeps, motorcycles, amphibious vehicles, scout and reconnaissance vehicles, self-propelled guns, tractors, trucks, military ambulances and more. The engineering department of the Army includes vehicle technician, electricians, storemans and metalsmiths to name a few. ...read more.

Officers are well disciplined and usually a respected part of a community. On an opposing side, people who do not agree with the service or law may discriminate against police officers. They may encounter dangerous and violent people in their line of work and be involved in hazardous situations such as armed robberies and shootings. Disturbing situations can cause constables to have unwillingness towards work and lead to mental health problems such as depression. Permanent injury can cause an officer to be incapable of carrying out his/her tasks, and may result in him/her having to leave the force. With all these factors taken into consideration, the Police Service is still a rewarding, challenging and essential part of law enforcement. I believe that there are an equal number of reasons for and against joining the Army. These reasons may vary depending on the time and the current affairs happening in the world. For instance, the situation in Iraq or the increase in terrorism may put off many people signing up. An Army soldier has more chance has a greater chance of being killed, injured or mentally affected than any other public service employee. Many people may join for the training or opportunities to gain qualifications such as driving licences or for the travel. The Army offers training in a vast array of trades and careers such as electricians, translators, engineers and builders. It also other recruits the chance to gain various driving licences at the age of seventeen. These include car, motorcycle, heavy goods vehicle (HGV) and tank Even though they may be certain hesitations when joining the British Army, it is still an indispensable part of the armed forces and defence of Britain. In conclusion, I believe that the Police service and the British Army are a valued and indispensable part of Great Britain and are well worth joining even though they do have a bad side. This bad side can be over come by the rewards of these careers and limitless job satisfaction. Page 1 ...read more.