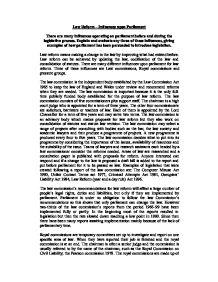 There are many influences operating on parliament before and during the legislative process. Explain and evaluate any three of these influences, giving examples of how parliament has been persuaded to introduce legislation.

Law Reform - Influences upon Parliament There are many influences operating on parliament before and during the legislative process. Explain and evaluate any three of these influences, giving examples of how parliament has been persuaded to introduce legislation. Law reform means making a change to the law by improving what had existed before. Law reform can be achieved by updating the law, codification of the law and consolidation of statutes. There are many different influences upon parliament for law reform. Three of these influences are Law commissions, Royal commissions and pressure groups. The law commission is the independent body established by the Law Commission Act 1965 to keep the law of England and Wales under review and recommend reforms when they are needed. The law commission is important because it is the only full-time publicly funded body established for the purpose of law reform. The law commission consists of five commissioners plus support staff. The chairman is a high court judge who is appointed for a term of three years. The other four commissioners are solicitors, barristers or teachers of law. ...read more.

Act 1996. The law commission's recommendations for law reform will affect a large number of people's legal rights, duties and liabilities, but only if they are implemented by parliament. Parliament is under no obligation to follow the law Commission's recommendations so this shows that only parliament can change the law. However two-thirds of the law commission's reports from the period 1966-99 have been implemented fully or partly. In the beginning most of the reports resulted in legislation but then the rate slowed down reaching a low point in 1990. Since then there have been many reports awaiting implementation mainly because of the lack of parliamentary time. Royal commissions are temporary committees set up to investigate and report on one specific area of law. When they have reported their job is finished and the royal commission is at an end. The chairman is often a senior judge and the commission is usually referred to by the name of the chairman, such as the Royal Commission on Civil Liability; the Pearson commission 1978. The royal commissions are made up of people with expertise or an interest in the subject under consideration. ...read more.

Pressure groups are interest groups that campaign for new law. A group of people who share a view about how they want the law to be changed can work together to convince parliament to reform the law. A pressure group may be temporary and deal with one issue or it could be a permanent body with a wider agenda in a particular area. Pressure groups collect information and formulate arguments and seek public support by raising public awareness. They do this by holding public demonstrations, advertising in newspapers, pamphlets and magazines. Pressure groups want politicians to realise that there is a lot of support for the pressure group which would convince them to reform the law. Some examples of pressure groups are MIND, SHELTER, LIFE, Help the aged, BMA and the NSPCC. Some pressure groups have been successful in achieving their aims. For example the Disability Discrimination Act 1995 was introduced as a result of pressure group activity. Greenpeace and Friends of the Earth have raised awareness to such an extent that everybody knows about these pressure groups and no government can afford to ignore the environmental consequences of its policies. The poll tax was abolished because there were too many campaigns against it. AS Law Marks received: 21/25 - A ...read more.

A good essay. Again, this student makes reference to case examples without explanation. Simply citing a case will not develop an explanation or argument.

The student fails to evaluate pressure groups in any substantial way; if she/he had, the mark would have been higher.

Other examples this student could have chosen include think tanks and private members' bills.