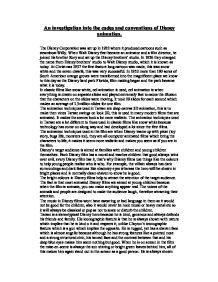 An investigation into the codes and conventions of Disney animation.

An investigation into the codes and conventions of Disney animation. The Disney Corporation was set up in 1922 where it produced cartoons such as steamboat Willy. When Walt Disney first became an animator and a film director, he joined his brother Rory and set up the Disney brothers' studio. In 1926 they changed the name from Disney brothers' studio to Walt Disney studio, which it is known as today. At Christmas 1937 the first feature long cartoon was made, this was snow white and the seven dwarfs, this was very successful. In 1953 more than 180 acres of South American orange groves were transformed into the magnificent place we know to this day as the Disney land park Florida, film making began and the park became what it is today. In classic films like snow white, cel animation is used, cel animation is when everything is drawn on separate slides and played extremely fast to cause the illusion that the characters on the slides were moving. It took 29 slides for each second which makes an average of 1.5million slides for one film. The animation techniques used in Tarzan are deep canvas 3D animation, this is to make then vines Tarzan swings on look 3D, this is used in many modern films that are animated. It makes the scenes look a lot more realistic. The animation techniques used in Tarzan are a lot different to those used in classic films like snow white because technology has come on along way and had developed a lot since the first films. The animation techniques used in the film are when Disney teams up with pixar (toy story, bugs life, monsters inc), they are all computer animated films which bring the characters to life, it makes it seem more realistic and makes you seem as if you are in the film. ...read more.

He is trying to kill Tarzan and gets tangled in the vines and dies by hanging himself, Tarzan shouts at him 'NO' so was trying to save him and stop him hurting himself. Disney's ideology tries to enforce that good always wins over evil, this is shown by the death of Clayton because they have equal strength but because Tarzan is the good person or the hero he survives and Clayton dies. Clayton slips and falls and Tarzan tries to stop Clayton from the cutting the vines around him but he doesn't listen so he ends up dying. It obviously doesnt show home dead or dying, as not to scare or startle the children who they don't wasn't to happen. Disney also tries to tell the audience that it is bad to destroy nature, it does this by showing only Clayton the villain and the pirates destroying it and at the end they lose so it is bad to ruin nature so it is trying to say that if you are bad you will lose. The heroine in Tarzan is Jane, she is tanned, has a small nose, brown eyes, light brown hair, big hips and a small waist, all these things show that she is petite, and may not be able to stand up for herself, her hair is long a d flowing and she is made like a china doll and made out to be very precious, but although it may come across as her being fragile and vulnerable, she is actually very independent and well educated. Snow white however is shown as being petite, with black hair, pale skin, blood red lips, very well shaped with big hips and a tiny waist, she is shown as being very fragile and needs rescuing by a prince, which is very typical of classic Disney heroines. ...read more.

The hero will often have two sidekicks to add comedy and humour into the film and the villain will have a sidekick to help fight the hero in the end that altogether makes eight characters that will all fit into the plot of the film. As well as the main eight characters there will always be a few additional characters to keep the film going and to tie things together, they are also there to keep the audience interested. The Disney corporation has affected my life by teaching me the things I learned when I was very little like good always wins over evil, and that destroying nature is a bad thing, and although I am not always good, I am sometimes evil without Disney films to keep me occupied when I was smaller I would have been causing havoc round my house so I think my mum and dad benefit from the entertainment purposes of Disney films as well as young children. Many people will never grow out of Disney films as they appeal to all target audiences and include a range of all different characters like in Tarzan it has a man living in the jungle, talking animals, a typical English lady, a crazy old man, a big strong evil man and pirates, but putting all these different types of characters on the Disney films they will always appeal to all different people. Mothers and fathers with young children will also enjoy Disney films, as they will keep their children occupied for hours so they will perhaps sit and watch the films with their families. Also when people get older they may sometimes like to revisit their childhood and they may be able to do this by watching Disney films. ...read more.