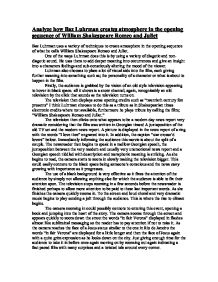 Analyze how Baz Luhrman creates atmosphere in the opening sequence of William Shakespeare Romeo and Juliet Baz Luhrman uses a variety of techniques to create atmosphere in the opening sequence of what he calls William Shakespeare Romeo and Juliet. One of the ways Luhrman does this is by using a variety of diagetic and non-diagetic sound. He uses them to add deeper meaning into occurrences and give an insight into a characters feelings and sub-consciously altering the mood of the viewer. Luhrman also chooses to place a lot of visual aids into the film, each giving further meaning into something such as; the personality of a character or what is about to happen in the film. Firstly, the audience is grabbed by the vision of an old style television appearing to hover in black space. all it shows is a snow channel, again, recognizably an old television by the click that sounds as the television turns on. The television then displays some opening credits such as "twentieth century fox presents" I think Luhrman chooses to do this as a tribute as in Shakespearian times electronic credits where not available, furthermore he plays tribute by calling the film; "William Shakespeare Romeo and Juliet." ...read more.

Connoting that this story was so big even Jesus was left behind. the Capulet and Montague buildings are both at opposing ends of the street- showing their competition, Jesus in the middle this could ether symbolize a common interest or the thing that separates them. Each buildings territory is invaded by buildings from the other and the words L'amour- I love are on a poster made to look like a popular brand as to catch the eye. The scenery also suggests the film is set somewhere with a warm climate. The scenes move on in time with the music next displaying an American police car with the words "Verona beach police" on the door- this showing the film is slightly Americanized perhaps in Baz Luhrman efforts to make it understandable to the new un-English generation. Luhrman then shoes the Jesus statue, almost a pivot to the scene. The statue zooming in and out of it from different angles using jump shots to good effect perhaps showing that religion underlies in everything in this story. Luhrman, again showing the two family buildings and Jesus in the middle once again. The choral music still flowing as the view from one building to the other is shown. ...read more.

Some words from a sonnet appear on the screen to a black background drawing attention to the words, showing significance "a pair of star cross'd lovers," "take their life." The "T" in "take" is made to look like the head stone of a grave to emphasize death. Luhrman then chooses to show close ups of each main character excluding Romeo and Juliet displaying their names to add a soap opera introduction effect. As hatred, excitement and drama build to create a unique and extremely intense atmosphere backed by the growing choral music. The wordst that the newsreader and Pete Postlethwaite are displayed on black backgrounds as they leave his lips. The music speeds up emphasizing them for one last time. The film builds up to a climax as a firework explodes showing the explosion of atmosphere tension and adrenaline! Scenes show key parts of the film before stopping on the title of the film. . . William Shakespeare Romeo and Juliet . . . all on a black background to draw attention... Luhrman chooses to use a prologue to fill in gaps that are perhaps not easy for the audience to pick up on during the film while creating an explosive climax only two and a half minutes into the film leaving viewers; optimistic, with a good first impression, pumped with adrenaline, out of breath and most importantly hopelessly hooked. ...read more.