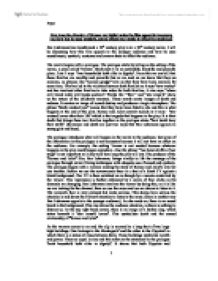 Baz Luhrmann. How does the director of Romeo and Juliet make the film appeal to teenagers and how has he used symbols, sound effects and music to affect the audience?

How does the director of Romeo and Juliet make the film appeal to teenagers and how has he used symbols, sound effects and music to affect the audience? Baz Luhrmann has transformed a 16th century play in to a 20th century movie. I will be discussing how this film appeals to the younger audience and how he uses sound/music, symbols, costumes and camera shots to affect the audience. The movie begins with a prologue. The prologue starts by telling us the setting of the movie, a place called 'Verona', which says it as an outlandish, beautiful and peaceful place. Line 1 says ''two households both alike in dignity''. From this we can tell that these families are wealthy and powerful but as we read on we know that they are enemies, as phrases like ''ancient grudge'' tells us that they have been enemies for some time. This has led to the violence between both families as it says ''new mutiny'' and has involved other families to take sides for both families; it also says "where civil blood make civil hands unclean". Words like ''fatal'' and ''star cross'd'' show us the nature of the children's romance. These words create images of death and sadness. It creates an image of cursed destiny and produces a tragic atmosphere. The phrase ''death marked love'' means that they have been fated to die and this is what happens at the end of the play. ...read more.

The music creates a foreboding atmosphere which links to the images shown. The scenes of violence, suicide, riot and death act as a contrast to the ''fair Verona'', (Baz Luhrmann uses violence, riots, deaths... to get the votes of young boys) we expect it to be a very peaceful, charming place. As the man is speaking subtitles are written as well, the texts are written in different fonts and the ''t'' in the phrase ''take their life'' is it forms of a cross. This shows the religious setting and Christ figure it represents, furthermore it is foreshowing the reason why they die since religion is the reason they kill themselves because it was the priests fault for not giving Romeo the letter in person. Also as the man is speaking the characters are shown in actions. For example, as the male voice says ''the faithful mind of these two foes'' we see the two families in their limousines with unhappy faces. This shows enmity and anger between the both families. Baz Luhrmann introduces the actors by writing the characters name and the position they are playing and their position in the family or film instead of writing the actors names. For example, ''Mercutio (Romeo's best friend)'', ''Romeo Montague (Montague's son)''. Luhrmann has used a very effective and unique method in introducing his characters compared to most films in which the actors are introduced by their real name as well as the character they play. ...read more.

Finally, Baz Luhrmann also uses the zoom in shot to show how he has transformed the movie, sword in to guns, he does this by zooming in to Benvolio's guns as he aiming for Abra and the printing on he's gun says "Sword 9 mm Series S". The director doesn't only use the colours of the family arms to shows the difference in the families, he also uses costumes. As the prologue ends it shows the Montague boys in the car, the boys are all wearing Hawaiian shirts which are undone, (this relates with young boys' lives) the Hawaiian shirts represent fun and shows that the Monatuges are lively and immature. When the Montague boys get to the fuel station minutes later the Capulets come, the Capultes are wearing black suits this shows that they are serious and mature. This shows that Baz Luhrmann makes the Montagues immature and lively but does the opposite for the Capulets, mature and serious. In conclusion, Baz Luhrmann has made a mind-blowing, hair gripping, exciting movie and has transformed every part of this play in to a movie, except one - the concept of marriage. He had changed swords to guns, the Prince to a cop. It was acceptable for people to get married at a young age in Shakespeare's time, because of the low life expectancy. But since we have high life expectancy we intend to get married between the ages of 20-40 years old, yet Baz Luhrmann fails to show this. Baz Luhrmann also fails to appeal to a wider audience - since his main target audience is teenagers. ?? ?? ?? ?? Fryer 1 ...read more.