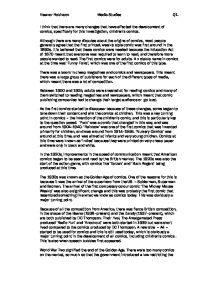 Comics in the media

I think that there are many changes that have affected the development of comics, specifically for this investigation, children's comics. Although there are many disputes about the origins of comics, most people generally agree that the first printed, weekly style comic was first around in the 1890s. It is believed that these comics were needed because the Education Act of 1870 meant that everyone was required to learn to read, and therefore more people wanted to read. The first comics were for adults. A notable name in comics at the time was 'Funny Folks', which was one of the first comics of this type. There was a boom in cheap magazines and comics and newspapers. This meant there was a large group of publishers for each of the different types of media, which meant there was a lot of competition. ...read more.

In the 1920s, improvements in the speed of communication meant that American comics began to be seen and read by the British market. The 1920s was also the start of the action genre, with comics like 'Tarzan' and 'Buck Rogers' being produced at this time. The 1930s was known as the Golden Age of comics. One of the reasons for this is because it was the arrival of the superhero from the US - Spiderman, Superman and Batman. The arrival of the first completely colour comic 'The Mickey Mouse Weekly' was also a significant change and this was probably the first comic that resembled something like what we know as comics today. This was obviously a major turning point. Because of all the competition from America, there was fierce British competition, in the shape of the Beano (1938-present) ...read more.

British quality comics were produced for a more sophisticated audience. Some comics from this time are 'Swift', 'Girl' and 'The Eagle'. There were many new British comics at this time. There were not many changes in comics until the 1970s which signalled the end of the reign of British comics and American comics started to dominate the market again. There were few British comics left, especially for children. More recently, comics have started to become more glossy and expensive and there has been an expansion in fanzines and more specialised comics, which are sold to a more selective group of people and the target audience is carefully researched. There have also been more comics tying in to the internet with most or all comics having their own internet page. In summary, I would say that there have been many changes in comics since their invention. There have been key turning points throughout the history of comics. Eleanor Robinson Media Studies Q1. ...read more.