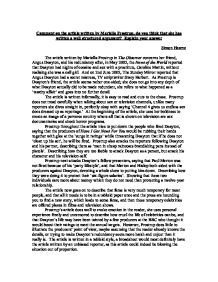 Comment on the article written by Mariella Frostrup, do you think that she has written a well structured argument? Explain your answer

Comment on the article written by Mariella Frostrup, do you think that she has written a well structured argument? Explain your answer Simon Hearne The article written by Mariella Frostrup in The Observer concerns her friend, Angus Deayton, and his redundancy after, in May 2002, the News of the World reported that Deayton had nights of cocaine and sex with a prostitute, Caroline Martin, without realising she was a call girl. And on 2nd June 2002, The Sunday Mirror reported that Angus Deayton had a secret mistress, TV scriptwriter Stacy Herbert. As Frostrup is Deayton's friend, the article seems rather one-sided; she does not go into any depth of what Deayton actually did to be made redundant, she refers to what happened as a 'tawdry affair' and goes into no further detail. ...read more.

Frostrup throughout the article tries to put down the people who fired Deayton, saying that the producers of Have I Got News For You would be rubbing their hands together with glee at the 'surge in ratings' while threatening Deayton that if he does not 'clean up his act', he will be fired. Frostrup also attacks the reporters following Deayton and his partner, describing them as 'men in cheap raincoats brandishing pens instead of pistols'. Describing how they are too feeble to attack Deayton as a person, but attack his character and his television-self. Frostrup next attacks Deayton's fellow presenters, saying that Paul Merton was not fired because of his 'party lifestyle', and that Merton and Hislop both sided with the producers against Deayton, devoting a whole show to putting him down. ...read more.

Frostrup's article does well to evoke emotion in the reader, she uses personal experience freely and uncensored to describe how cruel the life of celebrities can be, and that Deayton's life may have been tainted by a few producers at the BBC who thought it would boost their ratings to meet the annual targets. However, Frostrup does little to illustrate the producers' point of view, maybe assuming that the reader already knows the details, or trying to make Deayton's redundancy seem more harsh and unjust than it really is. The article is written in a tabloid style, a broadsheet would most definitely have the article written by an unbiased reporter, as this article could indeed be blowing the situation out of proportion. ...read more.