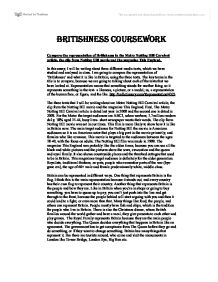 Compare the representation of Britishness in the Metro Notting Hill Carnival article, the clip from Notting Hill movie and the magazine This England.

Britishness Coursework Compare the representation of Britishness in the Metro Notting Hill Carnival article, the clip from Notting Hill movie and the magazine This England. In this essay, I will be writing about three different media texts, which we have studied and analysed in class. I am going to compare the representation of 'Britishness' and what it is like in Britain, using the three texts. The key terms in the title is to compare, because we are going to talking about each of the texts that we have looked at. Representation means that something stands for another thing, so it represents something in the text- a likeness, a picture, or a model; as, a representation of the human face, or figure, and the like. http://ardictionary.com/Representation/4323 The three texts that I will be writing about are Metro Notting Hill Carnival article, the clip from the Notting Hill movie and the magazine This England. First, The Metro Notting Hill Carnival article is dated last year in 2008 and the second one is dated in 2009. For the Metro the target audiences are ABC1, urban workers, 1.7million readers daily, 78% aged 15-44, busy lives- short newspaper meets their needs. The clip from Notting Hill movie was set in our times. This film is more likely to show how it is like in Britain now. The main target audience for Notting Hill the movie is American audiences so it is an American actor that plays a big part in the movie primarily, and females who like romance. This movie is targeted to the audiences between the ages 18-40, with the focus on adults. The Notting Hill film was made in 1999. The magazine This England was probably like the olden times, because you can see all the black and white pictures and the pictures show the wars, evacuation and the queen and royal family. It also shows countryside places and the thatched cottages that used to be in Britain. ...read more.

The Notting Hill film clip does show some accuracy of the setting of Britain, with the friendly people and environment, who have nice clean and expensive houses. Nevertheless, from the demographic of society is not accurate because it is not always like that; there are some places which do not have a friendly environment, and many people who know each other. This film was made not long ago, but it does show a bit of how Britain could be. This England Magazine does not show an accurate portrayal of Britain today, because the image shows that it is quiet and that there are not many people there, and today you see many people and it is not that quiet, and there are many houses and cars around, not just fields. We are meant to think that it is taken today, because of the way it looks. This was probably taken long time ago, back in the olden days where it was quiet then. It does affect the representation a little bit, because it is not like that now. I think that the message that the Notting Hill Coverage is giving the audience about Britain or Britishness is that the police are under attack from British youths. It will go to the target audiences and let them know what it is like, because they do need to stop the bad behaviour, and if they show it to many people then they will get the message eventually. The people with busy lives who take a metro everyday after coming in or out of the stations, they get to see what is going on, especially the people who do not like reading about politics. People who work expect security from the police, but the police are not always there to protect them because they are too scared themselves. The Notting Hill film clip is giving the audience a message about Britain or Britishness by showing us that sometimes it can be friendly, it does not have to be like the Notting Hill Carnival coverage. ...read more.

The aspects of British culture that the text leaves out are that there are other aspects of London life, like crime, diverse ethnicity and young people. The main social and cultural messages of This England Magazine are that it is all about what England was like before back in the days, they want the older generation to remember the things that use to happen then. The target audiences that they use are Royalists and traditional thinkers, ex-pats, and mostly people from the age 60+ male and female. The aspects of British culture that the text focuses on are that it has preoccupations with the war, and mainly to do with the royal family, history, countryside and the beauty of England. It shows it has happened a long time ago the bye-gone era. The aspects of British culture that the text leaves out are modern life, it doesn't show what is going on now in Britain. Also the technology, some of the photos are black and white, doesn't show the reality of living in 2009, and it leaves out the young people like the 'youth'. Overall I think that some of the texts are accurate in way, but mostly The Notting Hill film clip, because it shows more of what it is like in Britain, even though there can be youths who like to start trouble often. Not all of them are accurate either especially This England Magazine as it shows more of the wars that happened back in the days and it doesn't really show what is going on now in Britain. I think that The Notting Hill Carnival coverage is a bit accurate because things like this can happen and it ain't really that pleasant. Britain has changed a lot since the olden days, there are not many wars, but in other countries there are. You do see a lot of youths these days who like starting trouble and attacking others, but there are also friendly neighbours and nice people around In Britain. Wahida Begum ...read more.