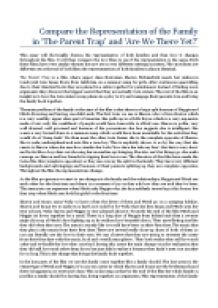 Compare the Representation of the Family in the films The Parent Trap and Are We There Yet?

﻿Compare the Representation of the Family in ?The Parent Trap? and ?Are We There Yet?? ________________ This essay will thoroughly discuss the representation of both families and then how it changes throughout the film. It will then compare the two films to see if the representation is the same. Both these films have very similar themes but are set in very different settings/contexts. The storylines are different yet at the end of both films the representations of both families is almost identical. The Parent Trap is a film where upper class Bostonian Sharon McKendrick meets her unknown tomboyish twin Susan Evers from California on a summer camp for girls. After continuous quarrelling due to their identical looks they are placed in a cabin together for punishment. Instead of finding more arguments they discover the biggest secret that they are actually twin sisters. The rest of the film is an insight in to how the twin sisters swap places in a ploy to try and reengage their parents love and bring the family back together. The main problem of the family at the start of the film is that there is a huge split because of Maggie and Mitch divorcing and having one child each. The first twin we see is Sharon who is from Boston which is a very wealthy, upper class part of America. She pulls up in a Rolls Royce which is a very expensive make of car; only the wealthiest of people would have been able to afford one. ...read more.

Are We There Yet? is a family film where American rapper Ice Cube begins an epic journey to get the woman of his dreams kids to her. At first Ice Cube (Nick) thinks it will be easy and thinks he can just send them off on the plane over to her. Following mishap after mishap Nick realises that this is a bigger and more costly job than he had ever imagined. More and more the kids cause trouble and almost push Nick to the edge causing countless damage to his car and stress to Nick. Although this is a journey from hell, Nick and the kids all gain something from the journey that means more than any car, family. Just like The Parent Trap the representation of this family at the start of the film is not they very positive. Suzanne has divorced her husband and is a single mum looking after her two kids on her own. There is no father-figure in the house-hold which may suggest a reason for the kids to be so rude to new people. Lyndsey and Kevin do not want a new dad they just want their own dad back so they can have a family. Because they are young and naïve they don’t understand that this will never happen. We can tell that Lyndsey and Kevin don’t want a new dad because every time Suzanne has a date they try to sabotage it and usually it works. ...read more.

the storyline is about Suzanne getting divorced with one man and then getting into a relationship with another. I think that nowadays it is more acceptable to be in more than one relationship (obviously at different times) than it was back in the 1960?s because as times have gone on so have views on divorce. I think that society doesn?t frown upon divorce as it is now such a common thing whereas back in the 1960?s it was very rare so when divorce did occur it was looked down upon. I think that family is a very important thing because it is the foundation for a good life and people with a full family can perhaps gain an advantage on those who don?t have a father/mother figure in the house. I am in two minds as to whether I believe that the family representation has changed because there are some similarities and some differences. I think that because of the way society looks upon divorce and family life in modern times there is a difference of representation, being that divorce is more common and less frowned upon. But ultimately I believe that the representation of a family will always be the same. It has love, joy and a bit more love. We see this at the end of both films, with the remarriage of Maggie and Mitch and the joy of Nick, Suzanne, Kevin and Lyndsey. At the centre of a family is love and I think we see this at the end of both of these family films. Joel Gordon. ...read more.