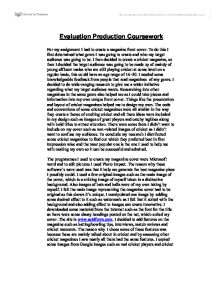 For my assignment I had to create a magazine front cover. To do this I first determined what genre I was going to create and who my target audience was going to be. I then decided to create a cricket magazine, so then I decided the target audience was going to be made up of mainly of young affluent males who are still playing cricket at some level on a regular basis, this could have an age range of 16-30. I needed some knowledgeable feedback from people that read magazines of any genre. I decided to do wide-ranging research to give me a wider initiative regarding what my target audience wants. Researching into other magazines in the same genre also helped me as I could take pieces and information into my own unique front cover. Things like the presentation and layout of cricket magazines helped me to design my own. The code and conventions of some cricket magazines were all similar in the way they create a theme of exciting cricket and all them ideas were included in my design such as images of great players and catchy taglines along with bold titles to attract attention. There were some facts I didn’t want to include on my cover such as non-related images of cricket as I didn’t want to confuse my audience. To conclude my research I distributed some cricket magazines to find out which they preferred best in first impression wise and the most popular one is the one I used to help me with making my own so it can be successful and admired.

The programmes I used to create my magazine cover were Microsoft word and to edit pictures I used Photo Impact. The reason why these software’s were used was that it help me generate the best magazine piece I possibly could. I used a few original images such as the main image of the cover, which is a striking image of myself taken in a distinctive background. Also images of bats and balls were of my own taking by myself. I felt the main image representing the magazine cover had to be original as this shows it’s unique. I manipulated one image by adding some desired effect to it such as watermark as I felt that it suited with the background and also adding effect to images can create innovative. I downloaded some material from the Internet such as the font for the title as there were some classy headings posted on the net, which suited my cover. The site is www.acidfonts.com. I decided to add features on the magazine such as batting/bowling tips, interviews, match reviews and cricket moments. The reason why I chose some of these features was because these are mainly talked about in cricket and by assessing other cricket magazines I saw nearly all them had the same features. I copied some images from Google images such as real cricket players and cricket related pictures, as I needed to add them since real cricketers were mentioned in my magazine. The magazine cover was printed on glossy paper so it could look legit and this adds to the presentation of the magazine.

My magazine will hope to be sold in each and every key retail shops including WH Smith and Tesco’s by them purchasing it from the warehouse and selling it on to consumers, as I need all the leading companies to sell my hope to be triumphant magazine.  Also it will be sold on the Internet where my target audience can order them via company websites such as www.cricketmag.com orwww.amazon.com. They can log on the Internet and purchase online. This way there is a variety of different ways my target audience will be able to access and buy my magazine. The two methods used, are the most common and popular ways to purchase a magazine shown from my research on magazine review websites, as it is well established and easy to buy. It will also be promoted on television to gain the viewers attention so that they are informed about the release of the magazine. This advertisement will be shown on sports channels as this is what my target audience prefer to watch in there spare time when they are free and also the genre of the magazine that is sports is related to sports channels.

I sense that my DVD cover has met its accomplishments, as it would certainly appeal to my target audience because I have the precise element of the best magazine cover I can create from the ideas of my audience themselves. Hopefully the contributed successful ideas that are put on to the covers will then be distinctive and will stand out from the rest of the cricket magazines. But if I had to do it again, the first thing I would do is make the magazine more interactive with the audience. The second thing I would do is maybe to add more images on the cover. This is because from my research there were the same amount of people who chose to have more images or more text, so next time I will do the opposite to what I did this time, which was more text. Overall I have learnt new skills and techniques whilst producing the magazine front cover.