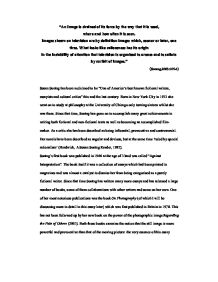 Examining and discussing the quotation from Sontag's latest book Regarding the Pain of others to see if her statement is just in its implications.

"An Image is drained of its force by the way that it is used, where and how often it is seen. Images shown on television are by definition images which, sooner or later, one tires. What looks like callousness has its origin in the instability of attention that television is organised to arouse and to satiate by surfeit of images." (Sontag,2003:105-6) Susan Sontag has been acclaimed to be "One of America's best known fictional writers, essayists and cultural critics" this and the last century. Born in New York City in 1933 she went on to study at philosophy at the University of Chicago only turning sixteen whilst she was there. Since that time, Sontag has gone on to accomplish many great achievements in writing both fictional and non-fictional texts as well as becoming an accomplished film-maker. As a critic she has been described as being influential, provocative and controversial. Her novels have been described as angular and devious, but at the same time 'ruled by special rationalism' (Hardwick, A Susan Sontag Reader, 1982). Sontag's first book was published in 1966 at the age of 33and was called "Against Interpretation". The book itself it was a collection of essays which had been printed in magazines and was almost a catalyst to dismiss her from being categorised as a purely fictional writer. Since that time Sontag has written many more essays and has released a large number of books, some of them collaborations with other writers and some on her own. One of her most notorious publications was the book On Photography (of which I will be discussing more in detail in this essay later) ...read more.

"Harrowing photographs do not inevitably lose their power to shock. But they are not much help the task is to understand. Narratives Can make us understand. Photographs do something else: they haunt us" (2003: 89) In this point, Sontag does concede to the fact that with photographs although they do have the power to shock us, photo's can be taken out of context because unless a photo belongs to the photographer the photo is timeless. By this I mean to the viewer the photo could have been from anytime or of any place. For example the photograph below depicts a large explosion in the background with some soldiers in the field in the foreground but you would be unable to distinguish when this photo was actually taken as it could have been from any war over the last 40 years. The viewer is given no more information on the subject and are therefore forced to use their imagination about where and what could be happening. In Regarding the Pain of the Dead Sontag concedes to the fact that photographs are 'anti-linear', that is to say that they do not have the linear existence as humans do. In order for photographs to have a linear existence they require annotation to provide the context for the photograph. Only by doing this does the photograph achieve a linear existence because it gives its audience a time period in which to place it in. "Movies and television programs light up walls, flicker and go out, but with the still photograph the image is still an object, lightweight, easy to carry about, accumulate, store" (Sontag, 1978: 3) ...read more.

it because I believe that I have seen the shot or similar shots too many times and therefore would be suffering from compassion fatigue. In conclusion I believe that in the most part Susan Sontag's understanding of the power of the still image is extremely well founded. I personally believe that the still image has a lot to offer the audience: it can capture people's imagination and give more strength to pictures than that of the moving image. Although it can be argued that television can give the audience a lot more variety and quantity of a subject whilst at the same time providing the narrative to explain its images, what it loses in detail of the event outweigh the other factors. For me, this decision came really because of the complete contrast of the Vietnam War footage of the street execution. Although an unpleasant and inhumane act carried out by the police chief, the photo was inexplicit and only suggested the act of violence, whereas the actual video showed it in its over explicit nature, which, after seeing it a few times although did still shock me, but showed no emotion: just a collection of images depicting death. I personally believe that you can tell more of a photograph than just a picture of something you have been witness to once - it can also create a 'flash bulb' memory, almost taking you back to that moment when the photo was taken. Sontag makes the point in her interview with the Boston review that writing a document is better than writing a novel because it is of a factual nature. She also then states that the interview that a photograph can have a greater effect then a document. ...read more.