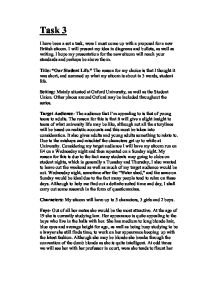 example of a composed sitcom

Task 3 I have been a set a task, were I must come up with a proposal for a new British sitcom. I will present my idea in diagrams and bullets, as well as writing. I hope my presentation for the new sitcom will reach your standards and perhaps be above them. Title: "Our Student Life." The reason for my choice is that I thought it was short, and summed up what my sitcom is about in 3 words, student life. Setting: Mainly situated at Oxford University, as well as the Student Union. Other places around Oxford may be included throughout the series. Target Audience- The audience that I'm appealing to is that of young teens to adults. The reason for this is that it will give a slight insight to teens of what university life may be like, although not all the storylines will be based on realistic accounts and this must be taken into consideration. It also gives adults and young adults something to relate to. ...read more.

Although she may be blonde she breaks through the convention of the dumb blonde as she is quite intelligent. At odd times we will see her with her professor in court, were she tends to flaunt her attractiveness in court, and mange's to sway the jury to give the verdict that she is hoping for, by seducing them with her looks. Cassandra- When it comes to Cassandra, she would be classed as the "geeky" one. Currently studying Maths at university level she is very on the intellectually scale of things, always correcting her friends when they get things wrong, which tends to get on their nerves at times. Cassandra's appearance would come along what we would classed as a "geek," long skirt and cardigans a long with the black glasses. Faye tends from time to time, try and change her appearance, but nothing seems to stick. When Cassandra goes to the student union we tend to see a wild side to her when she has drink in her, the geeky Cassandra suddenly becomes the wild student. ...read more.

His appearance is very appealing, and would be every girls dreamy boy, average height, brown well groomed hair, brown choc lately eyes to die for, and very up to date with the latest trends. Carter currently studying medience is trying to follow in the footsteps of his father, although this is not what he wants, but what his father wants. Therefore we tend to see a side to him which we can almost sympathise with. Liam- Well who said there was no gay boy on campus? Because Liam has just arrived. Liam is what we would call today a gay. He gets on very well with the girls, but not so well with Carter as Carter seems to think Liam has a crush on him, as Liam tends to get quite close to him as he likes to see him squirm. Liam's appearance is that he wears tight trousers, girly tops, and is overall quite slim. Liam is currently studying fashion as he wants to be a top designer when he is older. He designs his own clothes, as well as the girls' clothes from time to time. His greatest inspiration as the moment would be Gok Wan, from "how to look good naked." ...read more.