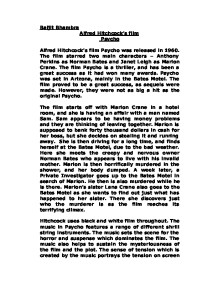 Baljit Bhambra Alfred Hitchcock's film Psycho Alfred Hitchcock's film Psycho was released in 1960. The film starred two main characters - Anthony Perkins as Norman Bates and Janet Leigh as Marion Crane. The film Psycho is a thriller, and has been a great success as it had won many awards. Psycho was set in Arizona, mainly in the Bates Motel. The film proved to be a great success, as sequels were made. However, they were not as big a hit as the original Psycho. The film starts off with Marion Crane in a hotel room, and she is having an affair with a man named Sam. Sam appears to be having money problems and they are thinking of leaving together. Marion is supposed to bank forty thousand dollars in cash for her boss, but she decides on stealing it and running away. She is then driving for a long time, and finds herself at the Bates Motel, due to the bad weather. Here she meets the creepy and nervous owner Norman Bates who appears to live with his invalid mother. Marion is then horrifically murdered in the shower, and her body dumped. ...read more.

The quick shots which make up the scene are of Marion being killed. As the audience, we don't actually see the knife piercing into Marion's skin. Instead we see quick shots of the knife. Sound affects of the knife plunging into her skin are added over the scene, these sound affects give the audience the impression that she is actually being stabbed, and the sound affects make the scene feel more realistic. The screeching string music also comes back during the shower scene. The music also adds to the suspense and horror of the scene. The shower scene consists of many different camera angles and sizes. The different camera shots and sizes make the scene more interesting and varying to watch. When Marion is being stabbed, close ups are used on her screaming face and on the knife. The close ups make her reaction look more realistic. Point of view shots are used in addition so that the audience see the mise en scene from Marion's view and from Norman's view. The point of view shots also add to the scene to make it more look authentic. ...read more.

In conclusion, there are many reasons why psycho was a classic when it was released and still remains a classic today. Hitchcock used new film making ideas and experimented with different techniques. He experimented with lighting, as in the shower scene, the backlighting used gave the scene a more mysterious feel. The different types of lighting used at different points in the film changed the mood and atmosphere of the scenes. Hitchcock also experimented with different types of camera shots. The different shots created a varying atmosphere throughput the film. The varying camera shots also made the film more interesting to watch. The string music also gave the film a more chilling and suspenseful feel. The string music was used as a warning in the film, and when the music started the audience are to feel as if something is going to happen. Hitchcock used film noir in Psycho. This was much more effective than if he had used colour film. I feel that compared to modern day thrillers today, Psycho was more sinister and mysterious because of the black and white film. All of these different film making techniques combined together made Psycho the classic it is today. ...read more.

Media language is beginning to emerge here in this analysis. At times this student does just re tell the plot and needs to be more analytical in approach.
***