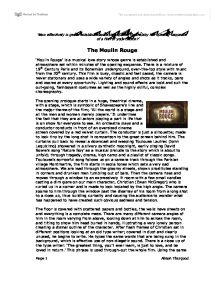 How effectively is genre established and atmosphere created by the opening sequence of Moulin Rouge.

'How effectively is genre established and atmosphere created by the opening sequence of a film of your choice?' The Moulin Rouge 'Moulin Rouge' is a musical love story whose genre is established and atmosphere set within minutes of the opening sequence. There is a mixture of 19th Century Paris and its Bohemian underground, over-the-top style with music from the 20th century. This film is busy, chaotic and fast paced, the camera is never stationary and uses a wide variety of angles and shots as it tracks, pans and zooms at every opportunity. Lighting and sound effects are bold and suit the out-going, flamboyant costumes as well as the highly skilful, complex choreography. The opening prologue starts in a huge, theatrical cinema, with a stage, which is symbolic of Shakespeare's line and the major theme of the film; 'All the world is a stage and all the men and women merely players.' It underlines the fact that they are all actors playing a part in life that is on show for everyone to see. An orchestra plays and a conductor conducts in front of an oversized cinema screen covered by a red velvet curtain. ...read more.

There is a close up of the type writer: 'The greatest thing, you'll ever learn, is just to love, and be loved in return.' This phrase is used through-out the whole film. Using the same phrase as expressed at the very beginning, it sets the genre and lets the audience know the film is about love and 'love is all you need.' The camera cuts between a close up of the man as backlight draws attention to his face and the tears on his cheeks and then to the typewriter, slowly spelling out those words that obviously make him very sad. Then the words 'Moulin Rouge' are typed, a voice over begins to tells us about the night club and its 'Diamond dogs'; the dancers and courtesans that work for Harold Zidler (Jim Broadbent) the extravagant owner. The camera now moves slightly in slow motion between short clips of the Moulin Rouge as it is now; run-down and derelict and how it was; colourful and full of people, it looks exciting, bright and a very happy place. The club is described as 'The kingdom of night time pleasures ... ...read more.

But he has nothing to write about. The scene has been set, and you know something about Christian's past with his father and why he came to France which is all cleverly illustrated through highly effective camera work and dialogue. However you must wonder why he was so happy, but now only one year later is so depressed and lonely. What could have happened? It can therefore be said that the opening sequence of the film introduces one to the world of Bohemian Paris and sets the scene inspiring the audience to ask questions about the future of the main character and his demise. There are all kinds of camera angles used to create atmosphere and mood. The music sound-track fits together with the genre of film and theme of romance. Main subject matters are already evident by the end of the opening sequence. The deliberate confusion amongst the characters emphasises the illusion and suspense, the element of love, loss of love and the overall idea that we are just actors fulfilling our roles in life. The use of camera angles, choreography, music and costume all reflect the intricate ideas behind the 'Moulin Rouge'. ?? ?? ?? ?? Page 1 Alison Thurgood ...read more.