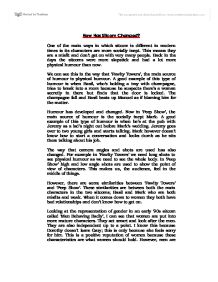 How Has Sitcom Changed?

How Has Sitcom Changed? One of the main ways in which sitcom is different in modern times is its characters are more socially inept. This means they are a misfit and don't get on with very many people. Back in the days the sitcoms were more slapstick and had a lot more physical humour than now. We can see this in the way that 'Fawlty Towers', the main source of humour is physical humour. A good example of this type of humour is when Basil, who's holding a tray with champagne, tries to break into a room because he suspects there's a woman secretly in there but finds that the door is locked. The champagne fall and Basil beats up Manuel as if blaming him for the matter. ...read more.

When it comes down to women they both have bad relationships and don't know how to get on. Looking at the representation of gender in an early '90s sitcom called 'Men Behaving Badly', I can see that women are put into more mature characters. They act smart and look after the men. They are also independent up to a point. I know this because Dorothy doesn't leave Gary; this is only because she feels sorry for him. This is a positive reputation of women because these characteristics are what women should hold. However, men are the immature characters who would do anything to sleep with women. However, looking at another sitcom from the early 2000s I can see that women have changed. In 'Scrubs' the women are more independent and strong. ...read more.

Another difference is BBC1 makes programmes that are of interest and value to society. Channel 4 however shows programmes catering for a wide range of tastes and niche audiences. In 1968 'Dad's Army' was broadcast as well as the sitcom 'The Beverly Hillbillies'. The difference between the two are 'Dad's Army' is a British sitcom where as the other is an American sitcom. 'The Beverly Hillbillies' was a very popular sitcom and was number one in the U.S. 'Dad's Army' was also popular and had 18.5 million viewers. When 'Dad's Army' was broadcast back in 1968 there wasn't much choice for television viewers, now there is a huge amount of choice. Channels attract viewers to sitcoms such as 'Friends' and 'Peep Show' by showing them at times when people would watch television. Also by making it appeal to the target audience by putting in the right type of humour to make it laughable. ...read more.