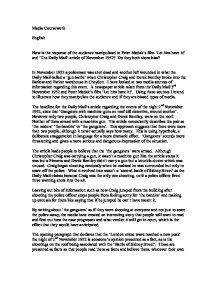 How is the response of the audience manipulated in Peter Medak's film 'Let him have it!' and 'The Daily Mail' article of November 1952? Do they both show bias? In November 1952 a policeman was shot dead and another left wounded

Media Coursework English How is the response of the audience manipulated in Peter Medak's film 'Let him have it!' and 'The Daily Mail' article of November 1952? Do they both show bias? In November 1952 a policeman was shot dead and another left wounded in what the Daily Mail called a 'gun battle' when Christopher Craig and Derek Bentley broke into the Barlow and Parker warehouse in Croydon. I have looked at two media sources of information regarding this event. A newspaper article taken from the Daily Mail 3rd November 1952 and Peter Medak's film 'Let him have it!'. Using these sources I intend to illustrate how they manipulate the audience and if they are biased types of media. The headline for the Daily Mail's article regarding the events of the night 2nd November 1952, state that 'Gangsters with machine guns on roof kill detective, wound another'. However only two people, Christopher Craig and Derek Bentley, were on the roof. Neither of them armed with a machine gun. The article consistently describes the pair as 'the raiders' 'the bandits' or 'the gangsters'. This approach suggests that there were more than two people, although it never actually says how many. This is using hyperbole, a deliberate exaggeration in language for a more dramatic effect. 'Gangsters' sounds more threatening and gives a more serious and dangerous impression of the situation. The article leads people to believe that the 'the gangsters' were armed. ...read more.

The camera zooms in on Derek, showing a physiological shot of him thinking and absorbing things around him. This implies that he is receptive to what goes on and possibly that he's impressible to people's actions and thoughts. There are a lot of close up shots showing the mental anguish he's feeling. Christopher Craig is first introduced standing against a lamp-post in a relaxed, arrogant manor. He appears to be very sure of himself. In the background bells start ringing which along with him being dressed in black signifies death. Christopher and Derek first meet, Christopher has lots of power over Derek and is very much in control of the situation. When he leaves the camera pans across the screen following the direction in which Christopher Craig left. This gives the impression that although Derek felt intimidated by Christopher, he was interested by where he came from and who he was. Christopher Craig is represented as coming from a 'bad' background because his gang is under the American gangster influence, they dress like hoodlums and he is obsessed by guns. Craig seems to be on a course for self-destruction he's growing up in a community where there's a gun culture and the under privileged turn to crime. Craig's brother has already been caught up in crime and got a twelve year sentence for an armed robbery which he was involved. ...read more.

to show that he was innocent or that he too was being misled, possibly by his brother or just by trying to keep up with his brother. Out of the two media forms I preferred the film because it was more interesting, providing more information about both the event and the boys, especially Derek. This made the actual incident more interesting because you could see what happened and because you have already got to know Derek you want to know what happened to him. Seeing him as a victim of the judges in the court is biased to how we feel when we see him get hanged which makes you feel angry towards Craig and upset that his family went through so much distress. The audience response in both media forms have been manipulated to create an interesting and informative news source. Both show biased by using emotive and formal language, they use the present tense and link phrases together. Both show bias towards the boys and in particular Christopher Craig. Portraying Derek as a victim in the film is biased and influences how we think, it makes us see him as innocent and misled. The newspaper article emphasises on the shooting of the police officer and makes out that the raid was made by 'gangsters'. Neither media sources say what happened without using hyperbole, generalising information or leaving certain information out to produce the information source that they want to. ...read more.