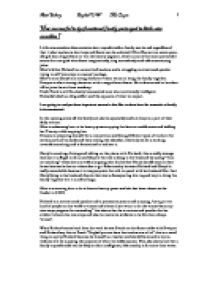 How successfully is a dysfunctional family portrayed in &quot;Little Miss Sunshine?&quot;

How successful is dysfunctional family portrayed in little miss sunshine? Little miss sunshine demonstrates how unpredictable a family can be and regardless of that it also teaches us how hope and desire can be achieved. Olive Hoover is a seven-year-old girl has a huge dream to win the beauty pageant, which is one of the most spectacular events for cute girls who dance imaginatively, sing marvelously and tells entertaining jokes. Olive's father Richard is a committed teachers and a struggling motivational speaker trying to sell 'nine steps to success' package. Olive's mum Cheryl is a strong character whom wants to bring the family together. Dwayne is also a strong character with a magnificent dream. He is determined to be silent till he joins the air force academy. Uncle Frank is a little-cheeky homosexual man who is extremely intelligent. Richards's dad is a drug addict and the opposite of what we expect. I am going to analyse three important scenes in the film to show how far eccentric a family is demonstrated. In the opening scene all the family are shown separately and are busy in a part of their daily routine. ...read more.

Scene 2 The Hoover families are sitting down for a meal together just before Olive finds out that she is a finalist in the little Miss Sunshine Pageant. Granddad swears at the food being provided is dysfunctional because we associate old people to be grateful and appreciative for what is on the table for lunch but he is not by swearing in front of children. Cheryl is trying to hold the family together by saying " I want everyone to have at least a little salad" shows that she cares for his family and want them to be healthy by making them salad, which is 'superveg' and it contains high concentration of antioxidants which is beneficial for health. Olive want to know what had happened to Uncle Frank, why did he want to commit suicide? . Richard tries to stop the inappropriate conversation But Cheryl convinces Olive to talk and she says that she is going to find out it anyway. Richard is also talking about Dwayne saying he show "tremendous discipline by being wordless and not talking to anyone for nine months" shows Dwayne's determination to be successful and Richard is Patronizing him because to make him have self belief, make him outstanding and makes him work harder than usual. ...read more.

Nothing exists that cannot be compartmentalized or segregated or turned into a self-improvement mantra about "winners and losers. One of the strengths of the film was the charming character of olive; she was an unbelievable character with a massive dream in her hand to fulfill. She was in love with pretty much all member of the family but especially with his Granddad whom helped him a lot to enter the beauty pageant. One of the weaknesses of the film was that granddad passed away just before the beauty pageant event and that was a mistake because if he was alive with believe he would have really entertain the audience by performing a funny dance with his family on the stage and I am sure the audience would have loved it. My overall verdict of the Little miss sunshine film was that it was very entertaining, unpredictable and extradinary it makes you think how a dysfunctional family over-comes the complicated difficulties of life and I strongly recommend it to other people to watch because it involves real life problem and teaches you how to be successful using Richard's nine step. ?? ?? ?? ?? 1 Amir Salimy English C/W Ms: Logan ...read more.