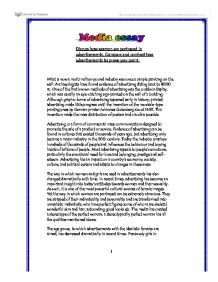 How women are portrayed in advertisements

What is now a multi million pound industry was once a simple painting on the wall. Archaeologists have found evidence of advertising dating back to 3000 bc. One of the first known methods of advertising was the outdoor display, which was usually an eye-catching sign painted on the wall of a building. Although graphic forms of advertising appeared early in history, printed advertising made little progress until the invention of the movable-type printing press by German printer Johannes Gutenberg about 1450. This invention made the mass distribution of posters and circulars possible.

Advertising, is a form of commercial mass communication designed to promote the sale of a product or service. Evidence of advertising can be found in cultures that existed thousands of years ago, but advertising only became a major industry in the 20th century. Today the industry employs hundreds of thousands of people and influences the behaviour and buying habits of billions of people. Most advertising appeals to people’s emotions, particularly the emotional need for love and belonging, prestige and self-esteem. Advertising has an impact on a country’s economy, society, culture, and political system and adapts to changes in these areas.

The way in which women and girls are used in advertisements has also changed dramatically with time. In recent times, advertising has become an important insight into today’s attitudes towards women and their sexuality. As such, it is one of the most powerful cultural sources of female images. Yet the way in which women are portrayed can be extremely atrocious. They are stripped of their individuality and personality and are transformed into unrealistic individuals, who have perfect figures some of whom are skeletal, wonderful skin and hair, astounding good looks etc. The media has created a stereotype of the perfect woman; a stereotypically perfect woman has all the qualities mentioned above.

The age group, to which advertisements with the idealistic females are aimed, has decreased dramatically in recent times. Previously girls in advertisements were used for their innocence and child-like behaviour whereas nowadays they are used for how grown up the appear.

As a result of advertising being the world’s biggest industry on getting information across, it is assumed by most, that every woman should be like the models in the advertisements.

This increases the pressure, on half of the world’s population, to adjusting the way they look to be like what is expected in today’s society. In the hope of fitting in, girls as young as eight start starving themselves in anticipation that they’ll lose weight. It is the main cause of certain health problems such as: anorexia, bulimic. It also causes problems with the way females view themselves, makes them lose self esteem, confidence and it sometimes it gets to a point where they cannot go on with life.

Advertisements like John Frieda hair products are the type that make young girls feel intimidated and want to lose weight or change their appearances. It is a two-page advertisement from the girl’s magazine “Sugar.” Two girls, who appear to be sixteen or seventeen years of age, take up three quarters of page, they are leaning against a surfing –board with the amazingly blue- green sea in the background. Both girls are attractive, they are dressed in outfits that would be worn during the summer maybe even on the beach, this reveals their figures and perfect skin. Most importantly, for John Frieda, their hair looks amazing; the streaks look natural as if they were professionally done.

The Garnier Belle- colour, for hair, assures women that their colour is “colour so natural you just can’t go wrong,” and you can achieve the professional natural look at home. Half the page is taken up with a woman, in her late twenties, and a much younger girl both of who are smiling straight at you, as though suggesting, “it’ll work for you.” Yet neither of these females would have the need to “cover greys,” as they are much too young, especially the younger of the two. The woman is beautiful with stunning hair, that most women would dream of . It comes across as healthy, smooth, silky and full. As does the little girls, amazingly both the lady’s and the girl’s hair are precisely the same colour with the same tones, this could signify that the tone of hair colour that can be achieved using the product, is the same as that of when you were younger. These types of adverts encourage not only women but also their daughters as well to dye their hair.

Both the John Frieda and the Garnier Belle- colour adverts have persuasive copies. The description in the John Frieda advertisement is very cleverly done, as it uses adjectives that are presented in such a way that it is alliterated. The vivid description is informative yet persuasive. The alliteration of the “s” sound within the copy paces the rhythm. It also makes use of phrases such as, “fresh –squeezed formula,” “sun’s natural highlighting power.” These phrases put across the impression that the products use very little chemicals and the chemicals that are used are natural or for the purpose of using natural resources such as the sun. This can be miss- leading. The John Frieda copy is especially persuasive as it uses words that appeal to teenage girls. It is every girls dream to cause “commotion by the ocean” because of the way they look. Surfing is also alluring to teenagers whilst at the beach; with this thought in mind the advertisers have made the advertisement more intriguing by using words like, “surferstyle,”  “revs,”  “sexy.”

On the other hand the Garnier Belle- colour advertisement is supposed to be targeted at a much more older age group therefore it uses phrases that intrigue older women, “natural ingredients,” “natural colour,”  “ cover grey perfectly with natural looking colour,” “protects hair.”  The reason being that older women have to look after their hair, as they are more likely to be losing their hair colour. Although the description of the product uses not many poetic devises it is still persuasive. Unlike the other advertisement it uses rhetorical devices as it addresses the reader in order to interact with the target market.

The layout, colour and style of the copy also makes an impact on the advertisement, if the layout is attractive it can stick in the memory of the reader.  In my opinion the layout and style if the copy in both advertisements is not one that one would remember. Although the John Frieda advertisement is slightly more interesting as the words “sun-streaked” are in blue, the same shade of blue as the sea in the background and the words “surferstyle” that are below it, are in two shades of green like the colour of the sea in the foreground.

Whereas the colours in the Garnier Belle- colour advertisements aren’t as much as eye catching but they reflect the product. The heading at the top of the page, “Colour as natural as nature intended” is in black, the subheadings and the slogan is in a maroony colour (like the models hair) I think the reason these particular colours were used is because they are two of the twenty seven shades available but it also gives out the message that the company is serious about their product which would appeal to the target market.

The success of an advert is dependant upon whether or not the product is portrayed, in a positive light to the target market. It would be difficult to suggest one of the two, which is more successful as both advertisements are targeting different age groups therefore use alternate advertising techniques. In this essay only two advertisements were used but if a wider range of advertisements were studied, it would prove that advertising today influences the behaviour of the majority of people. It would also reveal that the way in which women are used is still very sexist, idealistic and miss leading.