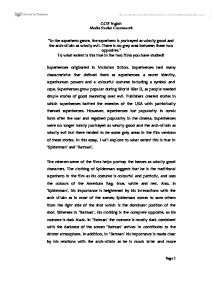 In the superhero genre, the superhero is portrayed as wholly good and the arch-villain as wholly evil. There is no grey area between these two opposites.I will explore to what extent this is true in Spiderman and Batman.

"In the superhero genre, the superhero is portrayed as wholly good and the arch-villain as wholly evil. There is no grey area between these two opposites." To what extent is this true in the two films you have studied? Superheroes originated in Victorian fiction. Superheroes had many characteristics that defined them as superheroes: a secret identity, superhuman powers and a colourful costume including a symbol and cape. Superheroes grew popular during World War II, as people needed simple stories of good mastering over evil. Publishers created stories in which superheroes battled the enemies of the USA with patriotically themed superheroes. However, superheroes lost popularity in comic form after the war and regained popularity in the cinema. Superheroes were no longer totally portrayed as wholly good and the arch-villain as wholly evil but there tended to be some grey areas in the film versions of these stories. In this essay, I will explore to what extent this is true in 'Spiderman' and 'Batman'. The mise-en-scene of the films helps portray the heroes as wholly good characters. ...read more.

Whereas in 'Spiderman' New York is presented in a positive way as Spiderman appears out of the sunshine. Therefore this contributes to Spiderman being an idealised American hero, as he saves the vulnerable people and therefore this helps out the police. Spiderman starts his hero career by seeking revenge from the car-jacker, although he soon learns his moral lesson and then saves the weak and forgets about all self-interested goals for the greater good. However Batman's hero career is based on revenge for justice. When he rescues the vulnerable, he manages to come across as evil and sinister, therefore he is a force of good but this is not recognised as it is harder to see on screen. Sound also creates a grey area for Batman however not for Spiderman. In 'Batman', there is a non-diagetic sound in the film every time Batman saves or arrives to help others. The non-diagetic sound is his theme tune; a sinister sound; it is played in the scenes in which Batman arrives to save the people of Gotham city. ...read more.